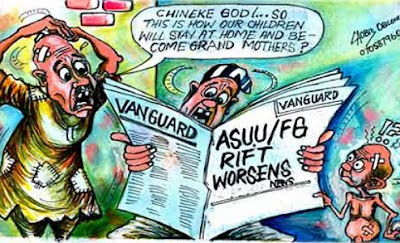 The ongoing strike by ASUU (Nigeria’s Academic Staff Union of Universities) seems to be taking longer than usual as a new deal with the federal government has been rejected by the officials.

The latest news is that the union has refused to call off strike after rejecting FG’S plan to re-negotiate their 2009 Agreement.

This was made known by Dr Ifeanyi Abada, the Chairman of UNN-ASUU while briefing newsmen in Nsukka after a congress attended by some national and zonal officers.

Abada explained that the union took this stand because government did not sign the agreement under duress.

He said UNN-ASUU and other chapters of the union nationwide were determined to withdraw their services until the federal government implemented the agreement.

“ASUU cannot be cajoled by any unbridled campaign or blackmail as being paddled by some federal government’s officials.

“The union is worried by the insincerity of government and condemns this perfidy in its entirety’’, he said.

Abada said ASUU was also demanding the removal of Prof. Julius Okogie, the NUC Secretary, for fanning the embers of hatred against members of the union.

“Okogie, who is supposed to mediate between ASUU and government, had regrettably morphed into another political valve through which universities were further demeaned and derailed.

“Okogie should be invited by government to account for over N100 billion Universities Stabilisation Fund.

“He has demonstrated that he has outlived his usefulness and bereft of innovative ideas and aptitude to turn universities around’’, he said.

He called on education stakeholders, the clergy and traditional rulers to prevail on government to respect the 2009 agreement it entered with ASUU to improve standards in tertiary institutions.

“We are not asking for government to fill our pockets with money, but that universities should be well funded.

“It is unfortunate that students in some universities take lectures in open spaces and in stadiums like in UNN.

“We are tired of producing half-baked graduates because of ill-equipped libraries, laboratories and lack of classrooms, while some politicians squander money meant to develop the country’’, he said.

He explained that that was the minimum percentage as recommended by UNESCO.

“This is an indication that government does not care about the quality of education in the country.

“Government should consider the future of Nigerian students and fulfill its own part of agreement it reached with ASUU.

“It is noteworthy that war torn Somalia and other smaller countries of the world who value education allocate above 26 per cent to education’’, he said.

“ASUU will not attend any re-negotiating meeting called by government. If government had known it cannot implement the agreement, why did it sign it?’’

About 200 lecturers attended the UNN-ASUU congress, which lasted for several hours.

So when will this strike end?