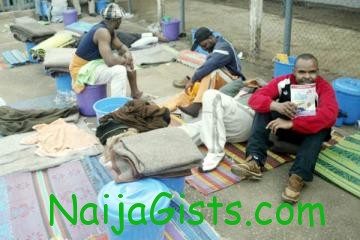 According to a report obtained from News of Africa, the Nigerian community in Austria led by Nigerian Ambassador to Austria, Maria Oyeyinka Laose had signed a treaty that any Nigerian caught without identify would be deported to Nigeria.

We learnt a father of one was allegedly deported without identity verification and this has caused panic among other Nigerians in Austria.

Nigerian communities in Vienna are boiling, they are weeping and wailing but yet their cries are like the lonely voice of John the Baptist in the wilderness without anybody to turn to. How long shall they continue to live in a state of uncertainty with the hope that one day it will be better? As reported, this treaty was unfortunate

Therefore, Nigerian communities in Austria are calling on the President and Commander in Chief of Armed Forces Federal Republic of Nigeria , His Excellency Dr. Goodluck Ebele Jonathan and members of the National Assembly both upper

and lower houses to please rush to their aid.

“The agreement exposes these persons who are without clear proof of Nigerian citizenship,most of them living in Austria for many years and well integrated (but not accepted as refugees according to the Geneva Convention).” Stated the brief. (News Of Africa)

Continue Reading
You may also like...
Related Topics:austria, deportee, Nigerians