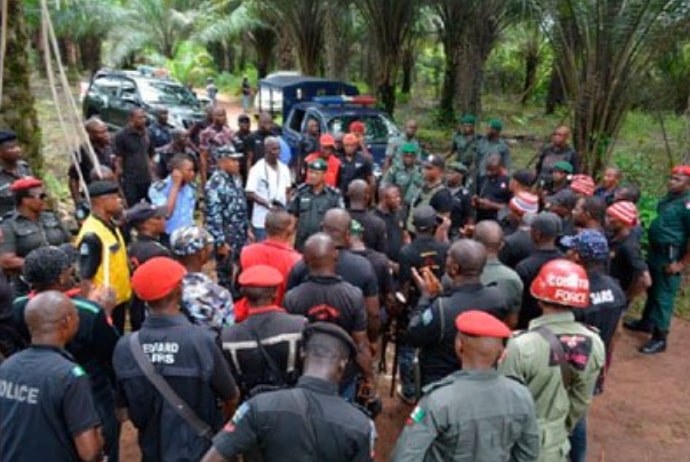 A raid on the Awara forest in Imo state has resulted in the arrest of several suspects, eliciting hope that Imo State’s most dreaded den of violent criminals has been demystified. OKODILI NDIDI reports

At last the forest of horror has been demystified, ending decades of horrific and blood-chilling tales of death and destruction.

The Awara forest in Ohaji-Egbema Council Area of Imo State was the den of criminal elements. Recently, it took a turn for the worse, becoming a haven for notorious inter-state kidnappers and militants who escaped security operatives in the Niger Delta.

Kidnap victims say there were several camps operated by different gangs in the forest where victims are chained to trees until their relatives pay ransom. In some cases according to revelations by the victims, some of the unlucky ones were slaughtered for ritual.

In the last few months, these hoodlums became even more daring in their operations as they adopted guerrilla tactics. They lay ambush along Owerri-Port Harcourt Road and diverted travelers into the forest, where they were held until ransom was paid. Some of the victims ended up being raped, molested or murdered.

Not even the poor were spared as the dare-devil kidnappers abducted anyone available, whisked them into the forest and collected ransom as low as N50,000 depending on the negotiation power of the victim’s family.

The impregnable forest attained the notoriety of ‘Sambisa forest’, instilling fear in the spine of the people at the mere mention of its name.

But the myth surrounding the forest has finally been demystified and the horror neutralized. The Imo State police command, led by the Commissioner of Police, Rabiu Ladodo, braved it and invaded the forest.

Expectedly, they met stiff resistance as the kidnappers engaged the policemen in a gun duel that lasted all through the night. At the end of the ten-hour operation, three of the gang leaders were cut down, while others were arrested.

This was followed by a mop-up operation where seven kidnap victims were rescued from the various camps in the expansive forest.

Celebrating the feat, the police spokesperson, Frank Mba, while parading the suspects at the Command’s headquarters in Owerri, said, “You will recall that on the 9th of April 2019, the Inspector-General of Police IGP Mohammed Adamu launched Operation “PUFF ADDER” and consequently directed all Assistant Inspectors-General of Police in charge of all zonal commands as well as all Commissioners of Police in all their states to replicate same in their area of responsibility. Today, I am glad to inform you all that the effort is yielding tremendous results.

“We are however aware that the Commissioner of Police, Imo State, CP Rabiu Ladodo has briefed and paraded suspects to you on a few occasions since the launch of Operation “PUFF ADDER” but we are here today to present to you some of the exceptional breakthroughs of the Command in crime fighting and detection. On this note, I present to you a total of nineteen (19) suspects involved in various violent crimes as follows;

“Following a tip-off received on 4/07/2019 that a gang of kidnappers were holding some victims hostage in a forest in Ohaji, operatives of the Command swiftly swung into action and stormed the kidnap hideout. On sighting the operatives, the hoodlums engaged them in a heated gun duel during which three of the hoodlums fell to the superior fire power of the operatives and two others escaped with serious gunshot injuries.

“However, the above named kidnap victims held captive in the kidnap hideout as at the time of the incident were all rescued unhurt including a pregnant woman. The rescued victims were subsequently taken to the Police Hospital for treatment, the doctor on duty certified that they were all okay and the pregnancy of the woman was still intact”.

It continued that, “Sequel to the bursting of the kidnap gang at Ilile forest in Ohaji/Egbema L.G.A Imo State and the rescue of seven (7) kidnapped victims mentioned above, operatives of the Special Anti-Robbery Squad (SARS) following thorough intelligence gathering and digital data tracking analysis arrested the above named suspects at Port – Harcourt, Rivers State. Suspects have made useful statements to the police touching on the various roles they played in the crime.

“On 15/06/2019, operatives of the Special Anti-Robbery Squad arrested the above-named suspect at Umuokanne in Ohaji/Egbema L.G.A of Imo State in connection with the kidnap of the above named victims. Victims were kidnapped along Maginezum/West Brook Hotel on 14/06/2019 and have identified the suspect among the gang that kidnapped them. The hospitalized victim Uchenna Anagbue was seriously inflicted with injuries all over his body for attempting to escape from the kidnappers den. After he was recaptured, the kidnapper put him into a septic toilet soak-away and covered it but if not for the quick rescue of the SARS Operatives, he would have died. Effort is on to gear to arrest the remaining suspect at large.”