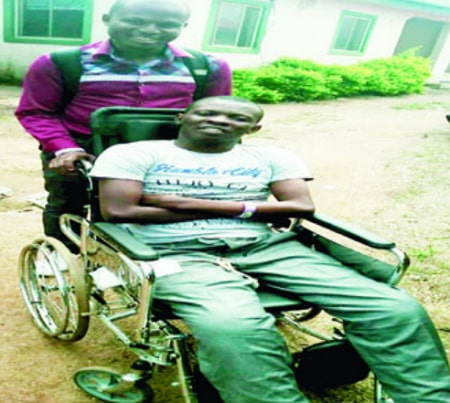 Mr Daniel Emori, who has been bedridden since he sustained spinal cord injury after he was knocked down by a cow that ran berserk has pleaded with the Cross River State government and the general public for financial assistance to enable him to travel to Indian for surgical treatment.

37-year-old Emori, who is from Adadama community in Abi Local Government Area of Cross River State said until 16 years ago when he was knocked down by the cow in Anambra State where he was working, he was in perfect condition.

He said N20 million is required for the surgery and other necessary logistics in India.

“I am Daniel Imo Emori from Adadama Community in Abi Local Government Area of Cross River State. I am 37 years old. But I had this accident when I was 21. I am the sixth child in a family of nine. My father is late and I have an aged mother.

“It was after my Senior Secondary Certificate Examination (SSCE) in 2,000 when I travelled to Onitsha Anambra State in search of greener pastures. I was employed as a factory machine operator in one of the companies. I worked for two years and later went to a driving school for six months.

“After being trained as a driver for those six months, I got employed by a pharmaceutical company as a delivery van driver.

“On October 10, 2003, I was on my normal official duty of supplying the company’s goods to various customers that I had an encounter with an uncontrolled cow. As I parked my vehicle in front of the customer’s shop to off load the goods, a strayed cow just charged towards me and knocked me down.

“Immediately I was rushed to a nearby clinic in Onitsha from where I was referred to the University of Nigeria Teaching Hospital (UNTH) Enugu. There series of scans and tests were carried out and it was realised that I had sustained spinal cord injury.

“As a result of the injury, I became paralysed till date. I have serious financial challenge and that was why I have not been to India for surgery as recommended by the doctors. Since then I have been bedridden.”

Emori said he had been receiving some assistance from individuals that has been sustaining him, even as he said it wasn’t enough to get him the permanent treatment he needed.

“I have been receiving some supports from public-spirited individuals, friends, family, loved ones and the entire public, including Elizabeth Foundation based in Wuse District of Abuja. But all my efforts to get assistance from my state government since 2007 were futile.

“I have been writing to them for financial assistance. None of the promises made to me has been fulfilled. Even the immediate past Speaker of the Cross River State House of Assembly from the same community with me had personally promised me to use his position and good offices to pursue my appeal. He didn’t fulfill any of his promises.

“It is just that the little support I have been receiving is not enough to take me to India where I will be treated. About N20 million was estimated cost of my travel to and treatment in India.

“Due to the current economic situation in the country, I no longer get more support from people. That is why I want to seek for more support and assistance from the general public through your medium.

“Currently, everything seems to be getting worse due to lack of medication. This is why I am appealing to fellow Nigerians, individuals, non-governmental organisations (NGOs), government agencies, my state government, Governor Ben Ayade and the entire public to come to my aid because I am silently dying on my sick-bed,” he begged.

A medical report Advanced Physiotherapy Rehabilitation Centre (APRC) in India indicated that the surgery that Emori would undergo shall help in strengthening his trunk strength and abdominal muscles to enable him to walk with artificial legs.

Among other things which the medical report said the Indian hospital will do for Daniel are the undergoing of a preliminary evaluation and conservative management/infection control, skin grafting and debridement, orthopaedics intervention and post-discharge stay and others.

“I have not given up hope as I strongly believe that help can still come from my state government, public-spirited individuals and well-meaning Nigerians. My earnest desire and prayers is to walk with my feet again,” he said.

Continue Reading
You may also like...
Related Topics:cow, daniel emori, down, knocked, man