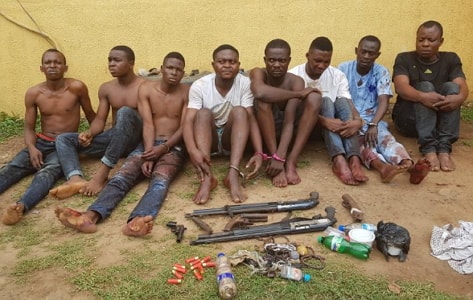 In a statement issued yesterday and signed by the Ogun State Police spokesperson,  Abimbola Oyeyemi, the suspects were apprehended at their hideout where they were holding a meeting in preparation for another deadly clash.

”In compliance with the directive of the Commissioner of Police, Mr Ahmed Iliyasu directive, the officer-in-charge of Federal Special Anti-Robbery Squad(FSARS) , Uba Adam, swung into action, and embarked on technical intelligence based investigation. Their efforts paid off when the hideout of the hoodlums was discovered. They stormed the place and got eight of them arrested with various types of dangerous arms and ammunition.

”The arrested cultists are: Muyiwa Talabi ‘m’; Tunde Adeyemi ‘m’; Korede Pariosho ‘m’; Dayo Johnson ‘m’; Segun Saka ‘m’; Niyi Adeshina ‘m’; Micheal Oluwaseun ‘m’, and Afolabi Ismail ‘m’. It was discovered that the duo of Muyiwa Talabi and Niyi Adeshina who are strong members of Aye group were the ones who hacked the victim of Wednesday clash to death. Their co-accomplice who also played prominent role was traced to his house by the rival group and hacked to death early this morning before Police got to his house for the purpose of arresting him. Recovered from them are two pump action guns, four locally made double barrel pistols, eleven live cartridges and assorted charms.”