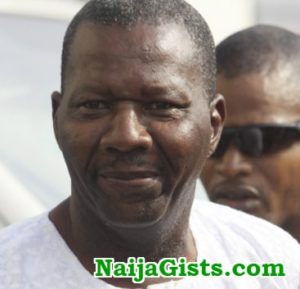 Nollywood actor Baba Suwe hasn’t been featuring in movies since his battle with partial stroke started over 2 years ago.

A new twist has developed to the ailment story that got the actor over one million naira in less than 24 hours.

According to a Nollywood source who requested anonymity, the actor is a chronic marijuana smoker.

The source said the actor whose only battle is weed addiction will now have a lot of options at his table.

“I hope that one day Baba Suwe will not become a crack addict. We just hope he is not already taking it since NDLEA once accused him of attempting to traffic cocaine.

According to the source, his neighbours said he smokes weed morning, afternoon and night. Even his children have been telling him to stop for his health but his only defense ‘s that the weed is the secret of his longevity and his companion since he lost his wife, Omoladun years ago”.

On why the actor hasn’t been featuring in movies, the source said producers who are aware of his problem are not willing to feature him in their movies.

Below is the viral video that got the actor over one million naira in 24 hour… courtesy of compassionate Nigerians and Nollywood movie lovers at home and abroad.

We hope he goes for rehabilitation soon.