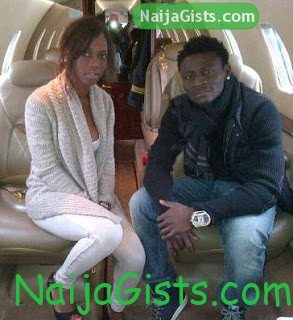 Yes o the deed has been done, we can now confirm that the beautiful sister of Mario Balotelli, Abigail Barwuah is pregnant and expecting a child with Nigerian footballer Obafemi Akinwunmi Martins. naijagists.com

According to a report from an Italian magazine, Abigail Barwuah is pregnant for striker Obafemi Martins.

The dad of Abigail’s unborn baby is said to be the 28-year-old striker at Inter, Newcastle United, Vfl Wolfsburg, Rubin Kazan, Birmingham City and now Levante.

Abigail was quoted to have said: “The baby is making its presence felt. This is a very special Christmas for me.”

Few weeks ago, the lovers were spotted by paparazzi in Italy kissing and hugging each other.

The relationship between Obafemi Martins and his new Ghanaian-Italian girlfriend started back in Milan, Italy when Obafemi was playing for Inter Milan FC.

According to a source, Balotelli is not happy with their relationship.