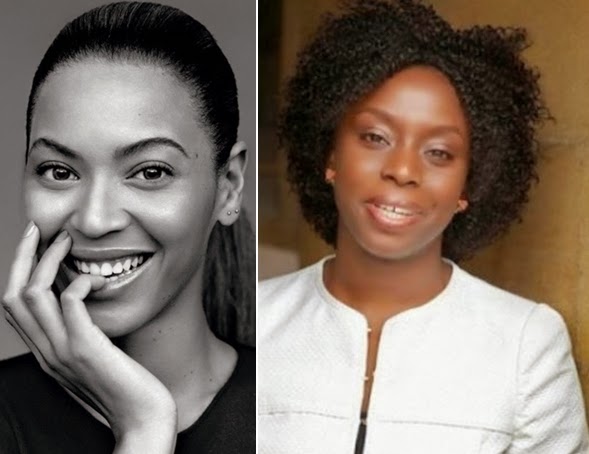 On Friday, Beyonce released a surprise holiday gift to her iTunes fans without previous notice. In a track titled Flawless on her 14-track album, Nigerian author, Chimamanda Ngozi Adichie was featured in the spoken word section.

Chimamanda Ngozi Adichie is an Igbo author based in America. She came into limelight through her distinct works, particularly this year, based on her 2013 novel, “Americanah”, the story of a Nigerian woman who leaves Nigeria in search of education in the USA, and the flick “Half Of A Yellow Sun” a 2013 Nigerian drama film based on her novel of the same title published in 2006. The drama features Chiwetel Ejiofor, Genevieve Nnaji and others. It was screened as a Special Presentation at the 2013 Toronto International Film Festival.

The multiple award winning 36 year old woman is from Enugu, Nigeria. She is also the author of “Purple Hibiscus”(2003), and “The Thing Around Your Neck” (2009).

Chimamanda is a very talented woman.