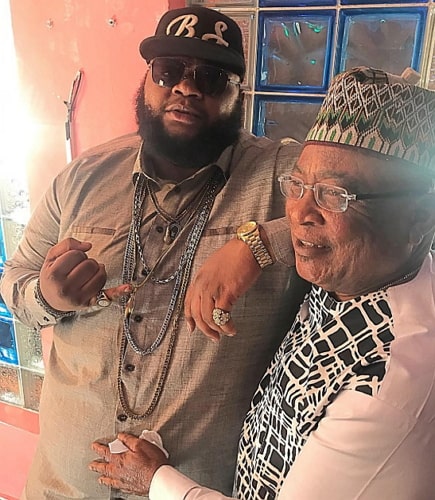 Kollington Ayinla and Salawa Abeni’s son, Sheriff Olakunle Ilori, aka Big Sheff, has openly confirmed his marital status which has been misconceived by some people.

The rapper and musician noted that he had lost a lot of prospective relationships due to this misconception.

“I don’t have any wife or children, a lot of people actually get things wrong. The children whose pictures are on my Instagram page are my nephews. A lot of girls have turned down my proposal because of this misconception. My sister and I are very close, so I transferred the love I have for her to her children, which is why people think they are mine.

“My brother lives in Canada with his wife, and they have a set of twins, while my sister has two kids in Nigeria. I take pictures with them at intervals. Last year, I was at the stage of getting to know a lady when she accused me of having kids already.

“I told her I didn’t have any child but she insisted I was lying. She even went as far as doing research on me via Google; she took a screenshot of the results of her search. After she confronted me with the screenshot, I was dumfounded; I had to apologise to her because there was nothing I would have said to convince her. I eventually told her I was sorry for wasting her time.

“I am single, but I am not searching because some ladies think I have kids. If I am searching, it means I am desperate and I’m ready to accept anybody that comes my way. Ladies don’t send me messages on Instagram anymore, I’m sure it is because they see me as a married man,” he told Saturday Beats.

As the son of Fuji maestro, Salawa Abeni, Big Sheff noted that one of his memorable moments as a musician was when he shot a music video with his mum. He also added that his mother criticises his song sometimes when she doesn’t feel comfortable with the contents.

“People assume I have it all together because my mum and dad are legends; sometimes being their son opens doors for me and other times it shuts doors. Salawa Abeni criticises my songs sometimes. I always try to make her understand that as a musician, it is necessary to give my fans what they would like to listen to.

“My mum regularly comes up with compositions, but I always tell her it is not my style and I can’t do it. I appreciate her contribution because there have been times when I have picked some lines from her compositions.

“Last year, I made a song titled, ‘Careless’, but she didn’t like the content of the song, but I tried to make her understand that the contents of my songs don’t define my personality; it is just about what my fans want to listen to. If I were not a rapper, I would be a psychologist; I have the ability to evaluate human beings. I still do that from time to time; a lot of people don’t know this about me,” he said.

Big Sheff is known to always remove his shirts on stage despite his big stature. When Saturday Beats asked how he has been able to remain confident and comfortable in his own skin, he noted that the secret behind his confidence was growing up in an environment filled with love.

“I was born big, but I grew up in a home with love. My parents and siblings never ‘body-shamed’ me. I am very comfortable in my skin; that is the kind of mindset I have; that is why I can take off my shirts on stage while performing. However, I am conscious of the fact that health is wealth so I am taking some steps to lose weight in my own way. I am going to lose weight for myself, not for people,” he said.

Continue Reading
You may also like...
Related Topics:big sheff, single