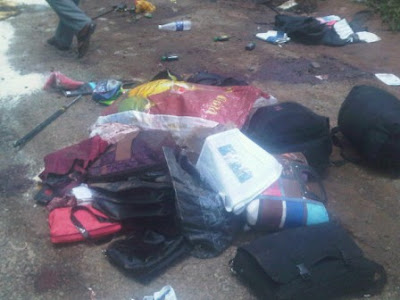 A truck carrying granite crushed an unidentified nurse to death in Ijebu Ode this morning.

Another lady in nurse uniform suffered a badly damaged leg in the incident which happened at Itoro Roundabout near Ijebu LG council around 10am.

The deceased nurse was a staff of Detomi Hospital, a private hospital on Molipa Expressway in Ijebu Ode.

The other victim is currently receiving treatment at Ijebu Ode General Hospital.

“It was a very pathetic situation as blood flowed freely with human intestine and skull scattered all over the road. Ijebu Ode is in grief now.

“The ladies were on a bike coming towards Oyingbo when at Itoro park the motorcycle and its passengers were crushed by a truck carrying granite. One of the ladies died instantly. The second lady had her legs badly damaged.

“Both of them were in the nursing uniform of a private hospital in Ijebu Ode. The injured lady was rushed to the hospital.

“The driver of the truck and the tanker driver, including the motorcycle rider fled the scene while an irate mob set the truck on fire before some policemen came and dispersed them.

The remains of the lady were packed away with a shovel by officials of the State Traffic agency, TRACE.