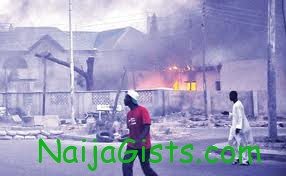 Some members of the Islamic sect, Boko Haram, razed a police station in Gombe in an overnight raid on Friday killing  14 people. naijagists.com

Brutalised bodies of 10 of the victims littered the burnt station yesterday and the others still trapped in a burnt car just outside the building.

The city was put under lockdown, with no residents allowed to leave their homes following the imposition of a 24-hour curfew across the state by the state government.

The attackers, after the gun and bomb assaults, also tried to break into the Gombe prison in a botched attempt to free inmates, according to witnesses and local radio.
According to eye witnesses, the gunmen and bombers moved into the premises from different directions. (organized attack)

They then launched their attack by  first  letting fly dozens of their Improvised Explosive Device (IED).

Two of the attackers died when their IEDs went off on the way to Gombe Line.
The State Police Commissioner, Mr.Ebikeme Orubebe confirmed 12 deaths. He said five others were injured but called for calm.

“I have seen at least 14 burnt bodies in and around the police station,” a witness in Gombe said on condition of anonymity.

He said he counted 10 bodies inside the police building, adding that the victims could be policemen, while four others were found dead in a burnt car outside the station.

“At a roundabout between the police station and the prison there was a car that was burned out with all its four occupants. It’s not clear who they were,” he added.

Locals said the police station was burned to the ground in the attack.

Another resident, Babandi Ali, said “the police station has been razed and there are burnt bodies inside, but I couldn’t confirm how many.” He confirmed the burnt out car at the roundabout with four bodies inside.

A jail guard told AFP late Friday that prison officers battled Boko Haram gunmen who tried to gain entry to the prison in an apparently failed bid to free group members being held there.

“The prison is intact,” a resident who lives nearby said.

The prison overlooks the police station and both are situated near the palace of the emir, the top traditional Muslim leader in the city of Gombe, the capital of a state of the same name.

Boko Haram, responsible for continued raids in northern states have repeatedly claimed its members are being illegally held in prisons and demanded their release.

Many of their recent attacks have targeted the police.

Suspected members of the group also gunned down five worshippers inside a mosque in Kano on Friday as the Maghrib prayers ended.

Later in Kano explosions were heard. Residents said gunmen stole a car belonging to the Independent National Electoral Commission (INEC), but it appeared to have stalled a few hundred metres later, and they blew it up.

The sect’s violent campaign has intensified in lately with the Chief of Defence Staff, Air Marshall Oluseyi Petirin, saying last week that the group had formed links with Al-Qaeda’s North Africa branch, known as Al-Qaeda in the Maghreb.

Boko Haram launched an uprising in 2009 which was put down by a military assault that left some 800 people dead.

After lying dormant for about a year, the group has re-emerged with a series of shootings and bomb attacks that have killed around 1,000. Rights groups in January had a toll of more than 935 people. Dozens of others have been killed since then in attacks blamed on the sect.

The group claimed responsibility for the Christmas Day bomb attack on a Catholic Church outside the capital Abuja that claimed at least 44 lives.

Witnesses and a medic said 30 vendors died in a attack on a market this week in Maiduguri, Boko Haram’s home base.