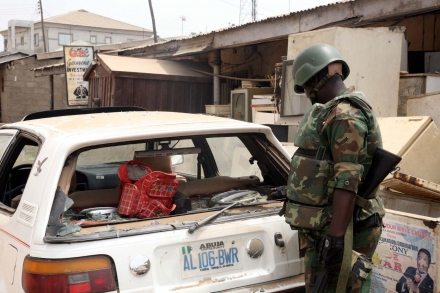 The spokesperson for NEMA, Yushua Shuaib, also confirmed that one of the victims who sustained serious injury has been taken to the hospital while five vehicles were also damaged by the blast.

He said nobody died in the attack.

The bomb went off 25 minutes after the church service began at 10 am.

Eye witnesses indicated that the explosion was strong enough to tear away the engine of the car near where it was planted and also sending metal shrapnel flying everywhere.

The area is in the vicinity of Madalla, where the militant sect killed 44 worshippers when it launched a suicide attack against St. Theresa’s Catholic Church last Christmas Day.

Gunmen suspected to be members of Boko Haram had killed three policemen and taken away their guns in Minna, the capital of Niger State in the past one week.

Once Upon A Time in Nigeria, Beyonce & Jayz…
CBN Governor Sued Over Fuel Subsidy Payment Documents For 2011