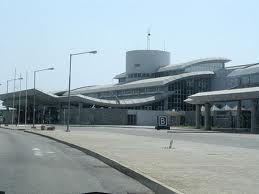 This is just as the State Security Service, SSS, has declared an ex-soldier, Habibu Bama, wanted over his alleged involvement in the Christmas day bombing of St Theresa’s Catholic Church, Madalla, Niger State that claimed more than 40 lives.

Following the security alert at the Abuja airport, vehicles carrying passengers to the airport were subjected to serious security checks, resulting in many of the cars and passengers being turned back.

Many of the intending passengers were forced to  trek long distance to the airport terminals in order not to miss their flights while several motorists took the nearby villages to return to Abuja town.

The disruption affected domestic and international passengers, especially those on London flights on British Airways and Arik Air flights. It was learnt that the enhanced security checks could lead to delays of many of the domestic flights out of Abuja.

Our checks at the International Terminal showed that only passengers with airline flight tickets and crew members were allowed to enter the terminal building.

A security source at the airport told reporters that intelligence report had indicated that members of the Boko Haram group were planning an attack on the international terminal of the airport.

The usual crowd of workers of the luggage handling firm at the airport was also pushed to the car park away from the building. The airport security also evacuated two adjourning parks to the terminal building.

Surprisingly yesterday, many VIP vehicles carrying top government officials were also not allowed into the airport.

Speaking on the development, Special Assistant to the Minister of Aviation, Mr Joe Obi, said the authorities regretted the inconvenience but had no choice than to carry out the exercise which he said would last till the Federal Government installs automated security gates at the airport.

Meanwhile, aftermath of intensive interrogation of the captured spokesperson of the Boko Haram sect, Abul Qaqa, the State Security Service, SSS, has declared another member of the sect, an ex-soldier, Habibu Bama, wanted.

The suspect was said to be known with several pseudo names including Habib Bama, Shuabu Bama and Habib Mamman and is Kanuri by tribe from Borno State.

Deputy Director Public Relations in the Department of State Service, DSS, Marilyn Ogar, while declaring the suspect wanted in a statement in Abuja, pleaded with members of the public to offer useful information that will lead to his arrest.

She added: “Members of the public with any information that could lead to his arrest are hereby implored to immediately contact the nearest Police station, military formation or any other security agency, please.”