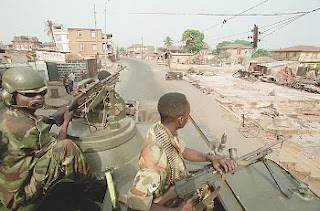 In the early hours of Monday the 2nd of December 2013, over 300 Boko Haram terrorists attacked a military base very close to Maiduguri Int’l Airport.

According to an eyewitness, the Islamists stormed the airforce base in Maiduguri around 3am today killing over 150 people.

According to sources, the bold attempt made by the dreaded Islamic sect to burn down the international airport was foiled after a 24-hour ban on vehicular and human movement in Maiduguri, Borno state.

An anonymous source from the Federal Aviation Authority in Lagos said Boko Haram’s attempt to burn down the international airport didn’t succeed because of the curfew.

Efforts to get official comment from federal aviation officials proved abortive as they declined answering their phones.

Shocked by the monumental attacks around the Maiduguri Airport and other military facilities in Maiduguri town today Governor Kashim Shettima has imposed a 2- hour curfew in the state.

Over 50 Security officials were killed in the attack while over 100 militants were reported killed by Joint Task Force men as the Islamist militants struck in Maiduguri, north eastern Nigeria this morning.

6 military vehicles were used to convey the military dead bodies, stated a source following a heavy attack and bombardment by the Boko Haram.