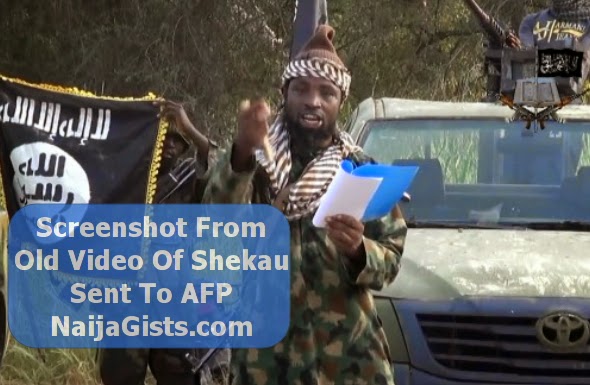 Boko Haram has released a pre-recorded video of Abubakar Shekau impostor who got killed in a counter-terrorism operation in Konduga few weeks ago in order debunk the claim that the Nigerian army has eliminated him.

As earlier reported, sources in Borno said the terrorists are yet to come to term that their leader has been been killed since they didn’t succeed in retrieving his corpse.

Today AFP claimed a new 36-minute video of Shekau was sent to them.

As at the time of this report, AFP is yet to upload the said video of Shekau alive.

Here is the transcript of the video as provided by AFP

“Here I am, alive. I will only die the day Allah takes my breath,” Shekau said in the 36-minute video, adding that his group was “running our… Islamic caliphate” and administering sharia punishments.

“Nothing will kill me until my days are over… I’m still alive. Some people asked you if Shekau has two souls. No, I have one soul, by Allah,”.

“It is propaganda that is prevalent. I have one soul. I’m an Islamic student.

“I’m the Islamic student whose seminary you burnt… I’m not dead,”.

A top security source in Borno said Boko Haram members are toothless dogs, they will use every avenue to claim victory over the Nigerian army.

“Shekau and his impostor are already gone. We are not sure if they will provide another replacement” – the source concluded