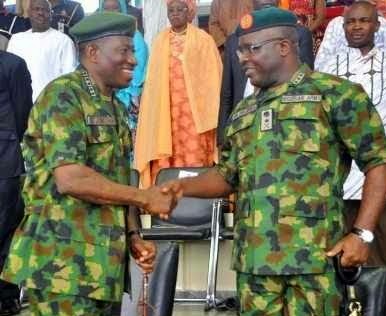 The strong caption is a clear as it can be. But rest assured we would not make such declaration if we were not absolutely confident of our findings. First I say “Ameen” to the prayers of the oppressed Chibok Angels in Sambisa who the Lord heard and opened our eyes to see the truth through all the purposeful noise from the Presidency, accusing our brave and patriotic retired Generals of terror they were actually perpetrating and supervising. Next I thank Dr. Stephen Davis for being brave and decent enough to lead us along the road to freedom from terror.

Nigeria’s north has been under a supervised foreign invasion and President Goodluck Ebele Jonathan knows about it. We are convinced beyond doubt that the Nigerian intelligence department knows the oil rich northeast is under foreign invasion because this is common knowledge to all other global intelligence departments and we have evidence to prove.

Consult my earlier writings on Boko Haram I and Boko Haram II. We are talking about Boko Haram II here which was founded in July 2010 to be precise by Abubakar Shekau I from Niger republic.

Late Mohammed Yusuf’s deputy who vied for the top spot when late President Musa Yar’Adua exterminated Boko Haram I; Mamman Nur hailed from Cameroon. Abubakar Shekau from Niger republic butted him out and declared the formation of Boko Haram II. Abubakar Shekau was in tandem with other foreign nationals, establishing the terror organization that was established to conquer and annex the oil rich northeast Chad Basin territory and as much of the fertile, uranium and other mineral and resource rich north as they could get. These foreigners abduct, raped and massacred Nigerians with glee.

Earlier, in 2009 another Boko Haram founder, Abu Mahjin, (Terrorist Identities Datamart Environment (TIDE) number 24350378) from Chad had been detected by American intelligence agencies to have gathered funds and travelled to Nigeria to set up this terror army to conquer the lucrative north. Quote: “Nigerian-based probable Chadian extremist Abu-Mahjin is keen to obtain more funds in connection with some sort of nefarious activity (possibly terrorism related) he is engaged in.”

All global intelligence agencies were tracking the movement and assembly of foreign terrorists in Nigeria under a comprehensive plan to establish an army and conquer the oil rich northern lands. Nigeria’s government cannot claim to have not been in the know. But rather than alert to this foreign terror invasion of Nigeria’s north, the Jonathan Government decided to keep it hush and utilize the terror reign as a political tool of intimidation, accusation and oppression.

Another young terrorist, Khalid al-Barnawi, believed by reports to hail from Niger republic also assembled in Nigeria to establish this occupation army. Many of these men received training from AQIM, Sudan and al-Qaeda HQ. They were heavily funded from neighboring nations and foreign partners. Training camps for this terror invasion were established openly in Niger, Chad and Cameroon.

Reason: Oil discovered in Niger and Chad was known to be abundant in north Nigeria. The Lake Chad basin and larger Chad basin traversing Adamawa, Yobe and Borno States is oil rich. Chad has been drilling oil from its side of the Basin and would rather Nigeria never drills from the shared pool. Chad is said to be doing the same thing at its border with Central African Republic, CAR, where the chaos in CAR allows Chad alone to drill the oil under both countries territory from its tiny portion of the shared oil pool. Borno is also in the Uranium belt and has rich stores of Uranium. Bama is an epicenter of Uranium – it seeps into and pollutes wells. The north is fertile, and resource rich. Boko Haram has been recognized to be bent on displacing the citizens from the land or killing them with aim, to conquer the land and its resource and not the people.

Nigeria’s leadership has been working in tandem with the foreign invaders. They have provided military equipment to Boko Haram terrorists and condoned the terror on the people of Borno and neighboring States. The names of foreign terrorists involved have been known by international intelligence; however the Nigerian Government never declared these terrorists globally wanted, which was an act of subterfuge and cooperation in terror against Nigeria. It can be recollected that it was only after in August of 2012 when Muslims Against Terror, an organization in which I have responsibilities, declared Boko Haram leader Abubakar Shekau I, wanted, that the Nigerian army did likewise in November of that year, three months after! Not before ordinary citizens preempted them.

This behavior was in line with consistent actions of the Jonathan Government, in permission, toleration and cooperation of/with occupying foreign terrorist leaders and groups acting in Nigeria. Nigeria’s army chiefs never care; blinded by billions of dollars and land in Abuja, they supervise as these foreign led terrorists cajole or forcefully conscript hundreds of Nigerians at a time to reproduce or fight for them. Blinded by money and mission, to the army chiefs and the foreign terror leaders, the people of the northeast are dispensable. They supervised and assisted in directly and indirectly exterminating the locals, killing them in careless military ops or killing them as Boko Haram after they – the unfortunate youth – have been easily forcefully abducted and conscripted while the army looked the other way. This cycle of death, repeated over and over helps achieve the ulterior invaders displacement and extermination goal. For most of five years, the Jonathan administration left a people helpless, seized their guns and denied them the right to bear arms and defend themselves.

We are also convinced that the State security department, headed by dictator Babangida’s boy, Sambo Dasuki understood clearly that Nigeria’s northeast was under attack from foreign organized agents, tolerated this invasion and promoted accusations against respectable northern Nigerians in cooperation with the ulterior agenda of the foreign agents set out to occupy Nigeria’s oil rich, fertile basin. There is no legitimate excuse for the State security department and Federal government to have not taken this globally recognized “transnational” foreign invasion seriously and alerted Nigerians on the true happenings and interest in our land and resource.

President Jonathan claimed Boko Haram were “ghosts” and he did not know where they were to negotiate with or to free the abducted girls; whereas that was all lies, he was aiding and abetting terror and concealing terrorists’ whereabouts. Our ENDS organization it can be recollected revealed to the entire world that the terrorists/foreign led army was hiding in plain sight with loaded, fully equipped camps holding our abducted girls in Sambisa forest, camps well known to locals and the federal army. This was Federal protection of terror. We can go on and on with such examples of clear federal government treasonous culpability.

Nigeria’s docile northern elders were taken for a ride, blind sighted; without receiving the real intelligence, believing there was something local and religious about Boko Haram II (which they thought was still Boko Haram I, the slightly less evil, local brand), they were gullible to the lies and less incensed by the invasion and occupation of their land by foreigners as tolerated by the knowing Abuja central government. Boko Haram carefully fooled most Nigerians that their mission was radical islamist by attacking only Christians at the beginning while forming their legions; and the northern elders who forgot their religious responsibility to be best hosts and protectors of the vulnerable, were conspicuously silent while Boko Haram under the permission of Jonathan who called them his siblings to be handled with kid gloves, recruited local and foreign fighters and purchased arms and military vehicles from the Nigerian army chiefs, also importing some through Chad, buying others though their network with MEND and other State authorized dealers, toward their ultimate mission. [“On July 2013, an ex-Niger Delta militant, Anietie Etim and four others who allegedly specialised in buying arms in Bakassi Peninsula f or supply to Boko Haram insurgents were arrested by the police.(8) The traffickers carefully constructed a special tank at the booth of an Audi salon car where they conceal arms for shipment to the north. The car also had an extra tank constructed for fuel to ensure enough fuel that will take them to their destination.”

Boko Haram territorialists had no religion or religious affiliation, they bought guns and worked with whoever, Niger Delta terrorists, the Igbo army chief, Borno state Chad invested ex-Governor; whoever would facilitate their mission and who had something to gain from their terror: defense billions, vendetta, increased stock in Chad oil investment, political opposition-bashing galvanization, e.t.c. Their job was simple: to conquer the resource rich north – land + resource only, without people – either as a new nation or to be annexed with the French colonies, Chad or Niger. Boko Haram’s propaganda, releasing dirty messages that should legally be censored, freely and religiously, exclusively through French media agencies was more than telling.

Nigeria must reconsider its relationship with neighbors, Chad, Niger and Cameroon, the francophone triad who have ranged from complicit to determinately participatory in the organized foreign invasion, occupation and planned annexation of Nigeria’s oil rich lands.

The Nigerian administration must be held to account for aiding terror and foreign invasion and intentionally distracting Nigerians while embezzling defense funds and undermining the military response. Heads must roll for the lives of our civilians and military dead.