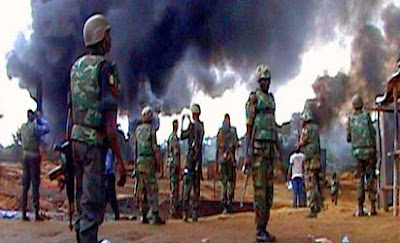 Some Boko Haram terrorists who unleashed terror on Army barracks in Bama, Borno State yesterday entered the country through the Cameroon border.

According to a report from the Defence Headquarters, the terrorists entered Borno from cells located across Nigerian Border with Cameroun through Banki town.

The Boko Haramists used high powered weapons like rocket propelled and anti-aircraft guns in the attack that lasted for over 4 hours.

A statement signed by Major General Chris Olukolade, Director of Defence Information, noted that “Ground troops backed by the Air Force have repelled the attack and are in pursuit of the insurgents.

“Details of casualties recorded in the incident will be released when the ongoing cordon and search operations in the general area is concluded” Olukolade said.

Meanwhile, reinforcement has been dispatched to enhance the operation in pursuit of the terrorists” the statement said adding “Normalcy is being restored in the barracks and the surrounding communities properly secured”

Boko Haram terrorists are fond of using loopholes in Nigeria’s security system to carry out their attacks. It is high time Nigerian military beef up their security tactics.