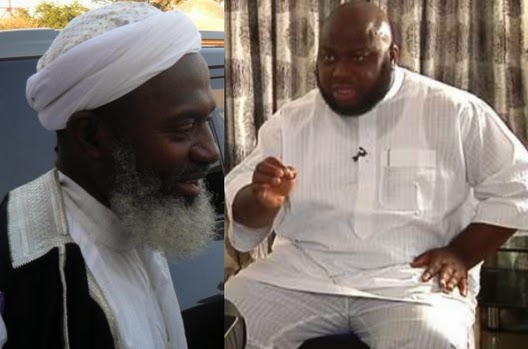 In an article titled, WHO IS BEHIND THESE MASSACRES, Sheik Ahmad wrote on his Facebook page;

The fact that many educated youth will throng into squares for immigration interviews looking for any available job -we all know quite well government salary is nothing to go home about- shows the level of want and economic hardship the nation is going through. You can die just looking for a job! If educated youth can not get a job, businesses are collapsing and closing, those that have no access to any governmental amenities – electricity, tap water, hospitals , fertilisers, etc are more apt to be poorer. So who is that rich enough to sponsor ‘gunmen’ or ‘herdsmen’ or BH to be rampaging the innocent villages both Muslims and Christians in the north? Men over hundred riding motorcycles carrying AK47s ravaging communities with impunity. I know only one terrorist organisation that is rich enough to sponsor mercenaries to do this dirty work. The M.E.N.D.

I know only one terrorist organisation that is rich enough to sponsor mercenaries to do this dirty work. The M.E.N.D.

1. They have the venom of hatred for all nigerians especially the north.

3. They have declared GEJ must continue over hell will loose on nigerians.

4. Theirs misguided provocative statements are met with state silence or even protection. I never heard Abati rebutting Asari. Birds of the same feathers?

Only a dumb person will be then looking for the financial source of these mayhems.
Allah saves us all!

In swift reaction, President of the Niger Delta Peoples Volunteer Force, Asari Dokubo described Sheik Ahmad as not just a liar but the worst of liars and responsible for the bloodshed in the North. He equally wrote on his facebook page;

THE MUNAFIQ AHMAD ABUBAKAR MAHMUD GUMI IS THE WORST OF LIARS

The Munafiq Ahmad Abubakar Mahmud Gumi is a man who claim to be a Muslim and a preacher….What guidance will a man like this provide for his congregation?…

1.In his lies he want’s us to believe that he was in the moon when his fellow Gambari Umar Yar’Adua ordered the ex-judicial murder of the leader of their armed gang Mohammed Yusuf,his father-in law and hundred of others.

2.It was the same Gambari Umar Yar’Adua who initiated the amnesty bribe to the Niger delta militants….which was touted as his greatest achievement as head of state of the Nigerian state.

3.The confiscation of the leadership of Nigerian state for almost 50 yrs by the Gambaris also led to the confiscation of the resources of the people of the Oil bearing communities…This is why the Gambari’s and their Arewa supporters/collaborators account for ownership of over 80% of the indigenous Oil prospective licenses…oil lifting concessions and product allocation.

4.It is the same Gambaris that promised us that they will make the polity ungovernable if Goodluck Ebele Azikiwe Jonathan win as president of Nigeria .

5.It was people like the Munafiq Ahmad Abubakar Mahmud Gumi that incited the gullible Gambari’s to go on killing sphere after GEAJ defeated them in the 2011elections.

Any unbiased and reasonable person will conclude from the above that the Munafiq Ahmad Abubakar Mahmud Gumi and his other Gambari goons are responsible for all the bloodletting in their backyard to frighten the people away from voting GEAJ in the upcoming elections in 2015 as they did in 2011 that led to their ignorable defeat….which they had avowed not to forgive the ordinary masses of the people of the north.