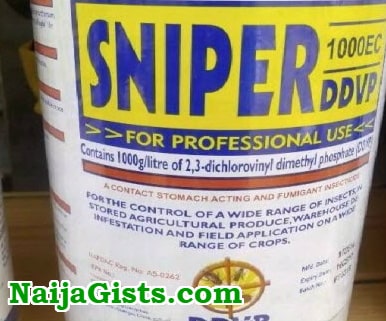 A young boy reportedly took his own life yesterday in protest against  reprimand by an elder sister.

Residents of Aniebo Quarters in Gadumo area of Lokoja where the family resides were thrown into mourning following the news of the suicide by the 12-year-old.

The deceased reportedly poisoned himself in their home by taking sniper, an insecticide.

It was gathered that the elder sister had placed punished him for some misdemeanor shortly after they returned from church, which the deceased bluntly refused to serve.

The father was said to have intervened by asking him to do frog jump instead.

It was gathered that after serving the punishment, the deceased retired into the room and took the poison, unknown to the parents.

The parents only got to know much later by which time the poison had begun to take effect.

All efforts to remedy the situation were to no avail.