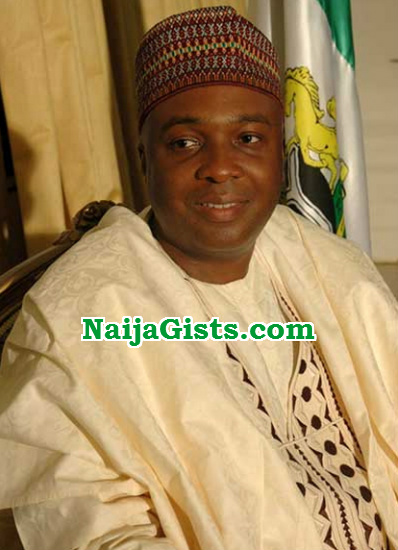 June 27, 2015 – Bukola Saraki: The Occultic Politician That Took Victory Away From APC To Stop Nigeria’s Much Needed Breakthrough

Few members of the All Progressives’ Congress (APC) would forgive Senator Bukola Saraki for daring to stifle the party’s irregular postage stamp of change; besides the cushioned seat and wooden gavel symbolising the exalted office of the new Senate President, a towering lust the size of a rat’s grace is all that’s left of him, in the eyes of the party’s leadership. By persistently defying the party’s dictates, Saraki has attained the reputation of an unrepentant deviant within the ranks of the ruling party.

But what manner of deviance is Saraki’s? A form of deviancy is emerges through lineages. Another as nemesis to valour. Yet another by spasms of cupidity and the mind’s eye. Senator Saraki personifies a bit of everything to everyone. To his friends and old associates in the Peoples Democratic Party (PDP), he is a hero. To his party, the All Progressives Congress (APC), he is simply a deviant. But Saraki does not seem to care about how people see him; he does not appear to be interested in being on the right side of history; neither is he given to the tasking politics of political correctness. He simply wished to be Senate President. Now, he is Senate President.

On June 9, Saraki was sworn in unopposed as Senate President, while APC chieftains and the party’s 51 senators, almost half of the 109 Red Chamber, assembled at the International Conference Centre (ICC) Federal Capital Territory, Abuja, at the behest of President Muhammadu Buhari, who reportedly requested the meeting in order to intervene and resolve the protracted crisis rocking the party over its choice of candidates for the leadership of the Senate and House of Representatives.

As the APC grapples with the sting of Saraki’s betrayal, the Senate President recently drew more blood from the sores he inflicted on his party by naming principal officers unapproved by the party for the 8th Senate. The naming of the principal officers further establishes Senator Saraki’s disdain for the party leadership. By refusing to honour the party’s position, Saraki has aggravated the controversy that threw him up as Senate President on June 9.

Rather than read the letter written to the Senate by APC’s National Chairman, Chief John Odigie-Oyegun, on the floor of the Upper Chamber, he ruled Senator Gbenga Ashafa, who brought up a motion on the matter, out of order. The letter spelt out the party’s position and its choice candidates for principal offices in the Senate. In it are the names of senators Ahmed Lawan (Northeast, Majority Leader); George Akume (Northcentral, Deputy Majority Leader); Prof. Sola Adeyeye (Southwest Chief Whip) and Abu Ibrahim (Northwest, Deputy Chief Whip).

A similar letter to the House of Representatives Speaker Yakubu Dogara, listed the names of preferred candidates for the principal offices in the lower legislative chamber. They are: Femi Gbajabiamila (House Leader), Southwest; Alhassan Ado Doguwa (Deputy House Leader),

Sagay went on: “The leadership of the APC should take the bull by the horn and discipline over ambitious Saraki. He should be expelled from the party before he destroys it. Saraki has succeeded in destabilising the APC through his in-subordinate and confrontational attitude. The party should make its position known and stand by its nominees for the principal offices in the Senate. APC should call the bluff of the arrogant and power-conscious Senate President. The party should not condone indiscipline. It should mete out severe punishment to Saraki and his co-travellers in the Senate who belong to the ruling party.”

Senator Saraki did not emerge Senate President because he was the choice of his party. Nor was he sworn in unopposed because the position was his birthright. He won the seat because at a very vulnerable moment in the life of his party, he executed a dangerous and devastating coup against it. Saraki, in connivance with disgruntled elements within the APC and the party’s arch-rivals in the PDP, perpetrated a perfidious coup that aided his installation as Senate President of the country’s 8th Assembly. Saraki did not emerge by his party’s much hyped politics of culture and decorum. He won in spite of it.

Saraki was elected unopposed as the13th president of the Nigerian Senate, following a proclamation letter from President Buhari ordering the inauguration, which was read out by the Clerk of the National Assembly, Alhaji Salisu Maikasuwa. The inauguration, which took off at exactly 10.02 am, was attended by 57 senators-elect. Thereafter, the clerk called for nominations from senators. Consequently, Senator Ahmad Sani (Zamfara Central) nominated Saraki as a candidate for the office of the Senate President.

The nomination was seconded by Senator Dino Melaye from Kogi West Senatorial District, after which the clerk called for further nominations but to the surprise of the assembly, there was absolute silence as his rival in the race, Senator Lawan, and nearly all his supporters were absent; 51 of them were waiting to meet President Buhari to resolve the leadership tussle concerning the NASS leadership. His election was accompanied by a resounding applause, following which he was led to the platform to take the oath of office and allegiance led by the clerk.

Thereafter, Saraki took his seat as the new Senate President, while the day’s proceedings continued. Saraki’s emergence was followed by the election of Senator Ekweremadu of the PDP as the Deputy Senate President. Ekweremadu, who had held the office for eight years in the 6th and 7th Senate when Senator David Mark held sway as the Senate President, was nominated by Senator George Sekibo from Rivers West Senatorial District. He polled 54 votes to defeat Senator Ali Ndume, who scored 20 votes.

The emergence of Ekweremadu was a fallout of the tough negotiations between Saraki and PDP senators the previous day. The PDP senators, who were mainly from the South-South and South-East, had alleged that the pair of Lawan and Senator George Akume gave them no sense of belonging because it was a North-North ticket. Hence, they promised to offer Saraki their total support if he would concede the Office of the Deputy Senate President to them in view of the closeness of their numbers to that of the ruling APC, which has the majority membership.

APC has 59 senators following the death of Senator Ahmad Zannah (Borno Central) in May, while PDP has 49. The proposal was accepted wholeheartedly by Saraki and at a meeting of the PDP senators-elect and the National Working Committee (NWC) of the PDP held at the residence of Senator Mark at 10 pm on Monday, the PDP senators resolved to give their votes to Saraki. In their rush to conduct the elections and install Saraki, the new Senate President was sworn in before his colleagues and fellow party members could arrive from the ICC, venue of their scheduled meeting with President Buhari.

Senate President Saraki cut a glum picture on his exalted seat even after he was sworn in as Senate President; this, pundits attribute to a probable foreboding of crisis in the wake of his brazen betrayal of his party. Saraki’s installation as Senate President, among other things, destroyed the chances of Gbajabiamila to emerge as Speaker in the lower house, according to pundits.

The party leadership later sent a message that it is not in support of the election of the new Senate President and was contemplating disciplinary action for erring members. In the face of the country’s lack of political parties with verifiable ideology that explains their value system and leanings, the APC had sought to institute such value system and political culture. More importantly, the party instituted the kind of party supremacy that is so critical in every democracy. Once the party takes a decision, no member, however powerful, influential or rich can change it, whether on the floor of the parliament or executive.

Yet, Saraki’s intransigence did not start today. In 2003, as soon as he became governor of Kwara State, he moved the account of the state from the defunct Trade Bank, owned by the state, to the now rested Societie Generale Bank, owned by his father, late Dr. Olusola Saraki, and where he worked as a director before his foray into politics. He was roundly condemned for the selfish move. He moved the account back to Trade Bank but did nothing to shore up the bank.

Again, the man who now presides over the hallowed Red Chamber that should uphold the constitution at all times played a less noble role in 2010 during the unnecessary constitutional debacle that resulted from the illness of former President Umaru Yar’Adua. The constitution was clear that in the event of any illness that renders the President incapacitated, the Vice President should be sworn in as Acting President.

However, Dr. Saraki, who was then the chairman of the Nigerian Governors Forum and the then Delta State governor, Chief James Ibori, because of their apparent closeness to former President Yar’Adua, did all they could to stall the emergence of Dr. Goodluck Jonathan, who was then the Vice President, as Acting President. It was after the civil society, the press and other vocal Nigerians had risen stoutly in defence of the constitution that Dr. Saraki and his co-travellers made a volte face and started supporting the “Doctrine of Necessity” under which Dr. Jonathan eventually emerged as Acting President and later President after former President Yar’Adua’s death.

A deserter from the PDP, Saraki would not take no for an answer due to his desperation to mount the coveted seat of Senate President for reasons best known to him. His perfidy against his party has predictably given vent to a cacophony of conspiracy theories; pundits alleged that he probably acted out a script jointly prepared with the PDP bloc in the Senate as a means of resuscitating the party from its near comatose state following its devastating loss to the APC at the recently concluded general elections. Another school of thought argued that Saraki simply yielded to his lust and youthful dream to preside over the National Assembly as the Senate President.

There was an odd, anachronistic formality to Saraki’s victory speech: it was hardly inspiring. It didn’t set his audiences afire, but while it reinvigorated the PDP bloc within the Senate, it basically infuriated and dampened the chances of the ruling party, the APC, in the Senate. Goaded by co-conspirators and his lust for power, Senator Saraki snatched victory away from his party and re-ignited the dying embers of the severely battered PDP.

But Saraki is far from done. The seat of the Senate President is a perch that will allow him to become the third most powerful figure in the country but it is uncertain if he would be able to command the respect and loyalty of the assembly given the treacherous manner in which he mounted the seat. Saraki’s lust for power apparently has a dark side. To achieve power, he dramatically neutered his party and the capacity of President Buhari to enjoy a National Assembly that would always be in support of him or that would at least add remarkable fillip to his proposed fight against corruption.