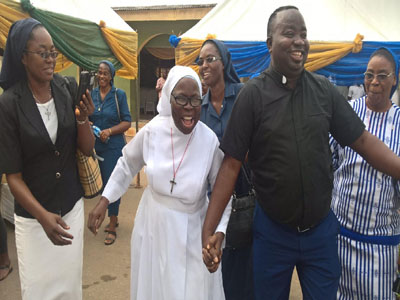 January 22, 2018 – “My Experience With Kidnappers has Helped Me Trust God More” – Says Catholic Reverend Sister Who Spent 53 Days In Den Of Kidnappers

On Monday, one of the freed Catholic Reverend sisters narrated how they were praying for their abductors while in their custody.

Sister Veronica Ajayi who described the experience as “horrible and painful” spoke at a thanksgiving held at the Catholic Diocese of Benin Metropolitan.

The Sisters spent 53 days in the kidnappers den before they were rescued after their abductors fled.

“The experience with the kidnappers has helped me to trust in God more. This experienced will help me to help others keep their faith in God.

We were sleeping when they came.

When they were taking us away, I kept trusting that God has a reason for it. We were praying for the kidnappers.

“They also said their own prayers. One of them wanted to learn our prayers. They did not say why we were kidnapped. We were praying for their conversion.”