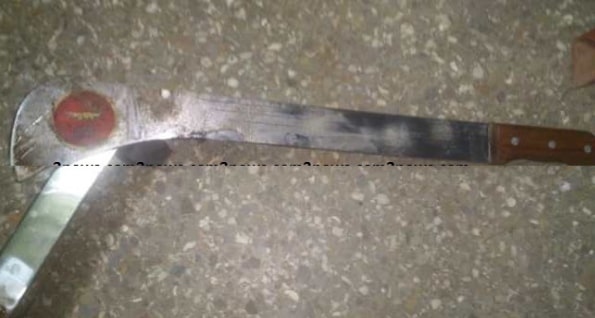 The Founder and Leader of the Miracle Healers Mountain Church at Kpone Kokompe in Ghana, Apostle Ebenezer Nana Asante, was also attacked during the 31st December 2018 watch night service at the church.

Apostle Asante was attacked while delivering the sermon for the watch night service in the full glare of the congregation.

The congregation had no option than to run for their lives, but the attacker succeeded in inflicting cutlass wounds on the head of one of the assistants to the pastor.

The victim is currently receiving treatment at the Kpone Government Hospital. The suspect is also in custody of the Kpone Police assisting in investigations.

Narrating what transpired to Onua FM’s Yen Sempa on Wednesday January 2, Apostle Nana Asante said in the course of preaching, two fire crackers [knockouts] were thrown into the church auditorium by some unknown persons, and therefore he advised the congregation to be vigilant.

He said moment after, a young man about 36 years, wearing boxer shorts, who had rubbed the entire body with local pomade [nkuto] entered the church with a cutlass and started shouting and menacingly advancing towards the head pastor with an intent to kill him.

Apostle Asante added that the suspect pitched the cutlass at him but he dodged without being hit. He said the suspect who had destroyed some church instruments, then pounced on a lady who was reading the Bible threatening to slash her throat but she was rescued by some men in the church.

The man of God said the suspect ferociously succeeded in his attack on one of his assistants, inflicting cutlass wounds on his head.

He however noted that the suspect’s wife and children are members of his church and so does not know what actually the problem was.

Apostle Asante revealed that this is not the first threat on him as a pastor in the area. “This is the third time”, he recalled.