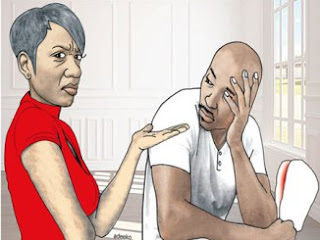 January 12, 2018 – Cheating Husband Gets Another Woman Pregnant, Blames Wife Of 11 Years For His Sins

A court in Lagos today dissolved an 11-year-old marriage between Elizabeth Shofunde and her husband, Babatunde, who impregnated another woman.

The President of the court, Mr Akin Akinniyi, in his judgment, said it appeared that the estranged couple were tired of the marriage as all efforts to reconcile them had failed.

“The marriage between Elizabeth Shofunde and Babatunde Shofunde is hereby dissolved today, both parties henceforth cease to be husband and wife.

“Both parties are free to go their separate ways without any hindrance and molestation,” Akinniyi held.

The petitioner, Elizabeth, 36; a petty trader, had told the court that Babatunde was a flirt, and had abandoned her after impregnating another woman.

“My husband abandoned me and the children after he impregnated another woman.

“It is now three years he left us; he refused to give me money for the children’s school fees, feeding and house rent,’’ she said.

Elizabeth said that Babatunde battered her at any slight provocation, alleging that her husband was a drunkard.

The mother of three added that she was fed up with the 11-year-old union because of Babatunde’s behaviour.

The respondent, Babatunde, did not deny the allegations, but said that Elizabeth’s attitude pushed him to another woman.

“My wife made life unbearable for me, and the frustration made me to impregnate another woman,” he said.

“Whenever we are fighting, Elizabeth brings out a knife or bottle to stab me, but I always escape.

“I had a domestic accident and was admitted in a hospital. Elizabeth only called me on phone and did not visit me; because of that, I stopped giving her money,” he said.

The respondent said that his wife denied him sex for one year.

He consented to the dissolution of the marriage, saying he was also fed up with the union.

Ibadan Housewife Denies Husband, Serial Womaniser Sex For Fear Of Contracting HIV
I Have Been Living Every Minute Of My Life In Fear, Save Me From The Cruel Hands Of My Wife – Man Tells Court