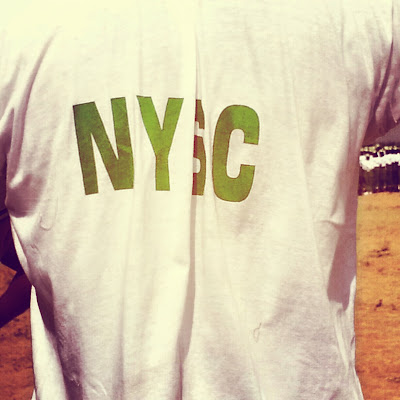 A corps member, Emmanuel Oyelaran serving in Ebonyi State was last weekend, stabbed in his left eye by one of his girlfriend for allegedly having an affair with another lady within the area of his place of primary assignment.Oyelaran who is now lying in a critical condition at the Federal Teaching Hospital, Abakaliki, FETHA, because of the injuries he sustained might never see again as it was reported that before the unfortunate incident his right eye were already defective.

It was gathered that a fight broke-out when one Happiness and Maria, whom the ‘lover boy” Corps member was said to have been dating, eventually met in his house on the fateful day.Investigation revealed that the fight was the fourth time the ladies were fighting in Corper Oyelaran’s house over who would take over the “lover boy” corps member.It was learnt that Happiness who hailed from Umuchima in Uburu town of the LGA, having been hurt by the promiscuous attitude of Oyelaran allegedly used a broken bottle and stabbed him on his left eye without considering the consequences of her action.
Meanwhile, when Vanguard visited Corper Oyelaran at the Federal Teaching Hospital, Abakaliki, he denied that the two ladies were his friends, insisting that they (the ladies) usually bring vegetables for him to buy until when both of them met in his house and engaged in fight.

According to him, when the fight started, he left to go and report the matter to their parents when Happiness caught up with him and stabbed him on his left eye.However, investigation revealed that the two ladies are single mothers; one with 3 children and the other with 2 kids purportedly from different men.

Contacted, the Ebonyi State Police Public Relations Officer, DSP Sylvester Igbo confirmed that the two Uburu ladies had been arrested over the incident as investigation were on to unravel the remote causes that made Happiness to stab the victim on his left eye having been aware that the corps member had difficulty in seeing with his right eye.He added that investigation had proven that the victim was dating the two ladies, Happiness and Maria before the unfortunate incident occurred.