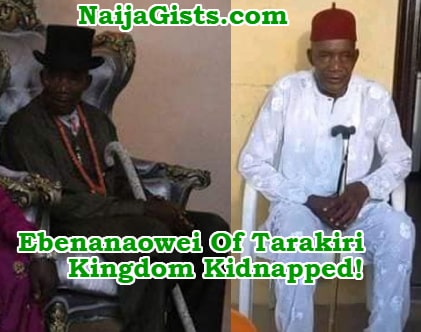 Some gunmen suspected to be kidnappers have abducted a traditional ruler in Bayelsa state.

84-year-old King George Agbabou Week, the Ebenanaowei of Tarakiri Kingdom in Southern Ijaw  was last night whisked away from his home at Ayama ijaw.

The monarch who happens to be the biological father of the Bayelsa Agriculture Minister, Doodei Week was kidnapped around 11:20pm last night by 7 masked gunmen who called AK47 rifles and other weapons.

According to witnesses, the kidnappers ransacked the palace of the king carting away television sets, jewelry and other valuables.

They were said to have mishandled the victim as they dragged him on the ground to the waterside, where they fled with him on speedboats.

Speaking on the development, the Paramount Ruler of Ayama-Ijaw Community, Chief Amen Sariki, confirmed the incident, saying the gunmen stayed in the community for about an hour looking for his house.

“About 11:20pm on Wednesday, the wife and children of our clan head ran to my house crying. It was clear that they had been beaten up. They broke the news to me that the King had been kidnapped.

“They told me that the gunmen held them hostage, while they searched the house. After searching, they carried a television set, collected jewelry and other valuable items. They then dragged the King who was wearing only pants on the ground up to the waterside.

“At that point, I started receiving report that the gunmen were still in the community. So I tried to reach the Joint Military Task Force and the Nigerian Police but didn’t get any response. After about an hour, I was told the gunmen had left the community.

“When we got to the waterside, I learnt that the kidnappers held a 20-year-old girl they saw on their way at gun point and asked her to tell them where my house is.

According to her, she lied that she is not from the community and wouldn’t know my house.

“To mount pressure on her to talk, they stripped and sexually harassed her for several minutes but she refused to tell them where my house was. When they got tired, they untied a speedboat belonging to the commissioner and fled the community.”