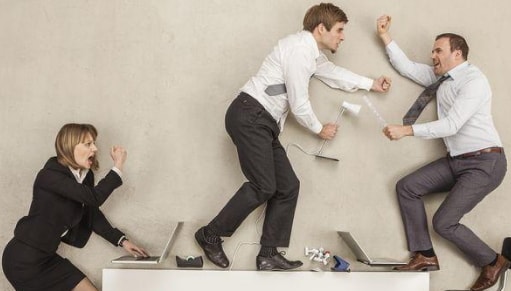 There is no environment or relationship that is conflict-proofed. With mild exaggeration, I will like to say that aside from the air that we breathe, the next thing that is second to ambient air in terms of ubiquity is conflict! As long as we have differences in personality traits, backgrounds, upbringing, childhood experiences, abuse patterns and family history, then conflict is sure to happen. Conflict is everywhere. You will always have it in your work place, in your home, among family relations, in churches, in mosques, among nations, among priests, between spouses and if not over exaggerated, I presume that sometimes, there will be conflict even in paradise! The consoling truth is that conflicts are the only infallible evidence that we are human.

There are many traditional ways of resolving conflict: The win/win approach, compromise, effective communication, empathy and so on, but the purpose of this piece is to make us see conflict in another light. In order to co-exist peacefully, we will need to change our perspectives about conflicts. In a world where peace has become so elusive and psychologically unattainable, we may definitely need to shift our perspectives a little bit beyond conflict resolution and management to something more dynamic. Seeing conflict as an opportunity for growth is the most purposeful way of resolving conflict.

When a seed is sown into the earth, something happens within the seed. In the process of growth, it will violently lift up the earth from a depth. An offish observer might think that a conflict is going on between the seedling and the earth but in actual sense of it, it is simply the onset of something more dynamic and inevitable, which is growth. What an idle observer will see as a conflict between the seedling and the earth is simply growth trying to happen!

I have been delivering seminars, trainings and orientation programmes on the topic of conflict resolution for the past seven years and I can authoritatively say that conflict is not the problem, our attitude to conflict is actually the problem.

Whether in organizations, in relationships, marriages, partnerships or friendships, we must come to a point that we know that conflict is not the end. It is the beginning of a new order and phase but the most poignant and sympathetic truth is that we mostly give up just before our ‘transformations’. The onset of conflict has been the doom of many relationships and marriages simply because the parties involved are too impatient to allow conflicts to grow them. We must not just go through conflict, we must grow through conflicts. Many relationships, marriages, partnerships and alliances have been sunk into oblivion just because of the wrong approach to conflicts.

In marriages and relationships, conflict is just a stage before growth. It helps you and your partner realize more of your potential as individuals and as a couple.  Conflict can be a door to healing from unmet needs, old hurts that happened before you ever met your spouse and old protective patterns that worked for you once, but don’t work in adult relationships. Conflict will test your assumptions and take you to a new level of self-awareness. Someone once said, “Love is blind; marriage opens its eyes”.

Conflict in relationships is almost inevitable and also has its purpose. Without conflict, there is no growth. The only path that is truly sustainable in relationships is the one that goes through conflict but often our erroneous definition of bliss has always been the avoidance of conflict. As we struggle to find solutions, conflict leads to new ways of thinking and new levels of maturity. Nothing ever changes in a world without discord.

Many marriages would not have collapsed, many relationships would have metamorphosed to higher forms, many wars would have been averted, and many partnerships would have worked out well, if only we had changed our perspective to conflicts.

CONFLICT IS INEVITABLE: Conflicts and hurts are inevitable. Bob Marley once said, “The truth is, everyone is going to hurt you. You just got to find the ones worth suffering for”.

CONFLICT IS AN OPPORTUNITY FOR GROWTH: The best way to resolve conflict is to see it as an opportunity for growth. Growth has only one sure path and it is through conflict. Conflict is growth trying to find expression.

CONFLICT MUST NEVER BE IGNORED OR AVOIDED: Conflict is not the problem, avoiding conflict is!  It is what is faced that can be phased out. When conflict is ignored or avoided, the aftermath is always destructive. Mature people don’t ignore conflict, infact avoiding conflict is a crude sign of immaturity. Relationships that are in a state of bliss are the ones that have grown over the years to productively handle conflicts.

CONFLICTS HAPPEN WHEN EXPRESSION IS HINDERED: Those who make peaceful expression impossible, will make violent responses inevitable! Creating a conducive environment for expression is one of the panacea to conflicts, it actually shows that we value other people’s view point.

CONFLICT CHALLENGES UNREALISTIC ASSUMPTIONS AND EXPECTATIONS: Unhealthy expectation strains marriage and relationships. It makes others look as if they are incapable and incompetent. Bill Lemley once said, “When nobody around you seems to measure up, it’s time to check your yardstick”.

CONFLICT IS A CALL FOR CHANGE AND ADJUSTMENT: Conflict is a call for adjustments. The strongest relationships are often the most adjusted. We must keep adjusting ourselves to new realities. Some changes don’t just happen except through conflicts. Joyce Meyer once said, “You can suffer the pain of change or suffer remaining the way you are”. When conflicts arise, the next question to ask is simply: What are we to change? The worst way to perpetuate conflict is always trying to change the other person without working on changing ourselves. Leo Tolstoy said, “”Everyone thinks of changing the world, but no one thinks of changing himself”. We have to accept the hardest truth of all:  In order to have the relationship we want, we have to change.

CONFLICT IS A CALL FOR SELF RE-EXAMINATION: Socrates said, “An unexamined life is not worth living”. We need to continuously re-evaluate ourselves. Most times, we spend much time apportioning blames to the other party during conflict when actually we are supposed to be examining ourselves.

CONFLICT IS SOMEONE ELSE WANTING TO BE HEARD: Paul Tillich once said “The first duty of love is to listen”.  Listening to your loved one would be one of the greatest gifts that you can give to your partner.  Taking out time to listen to others is one of the most effective tool in conflict resolution. Michael Josephson said, “Listening doesn’t mean obeying, it means making a true effort to hear and understand what the other person is saying and feeling”. Some people don’t listen, they practice ‘selective hearing’ when listening. In other words, we only hear what we want to hear. Think how much better relationships would be if parents really listened to their children; if children – minors and adults – really listened to their parents and if husbands, wives and significant others really, really listened to each other. Listening is an act of love and respect.

CONFLICT IS A CALL TO BRAINSTORM AND NOT BLAMESTORM: Many relationships and marriages would have matured to fruition if the other person was not a fault-finder. Putting the blame on others won’t solve the problem. Baylor Barbee said, “Relationships fail because people take their own insecurities and try and twist them into their partner’s flaws”. While brainstorming put a demand on our creative and innovative abilities, the result of blame-storming has always been destructive and deflative. Most times the only visible outcome of blame-storming has been resentment. Brainstorming attacks the problem by evolving viable solutions while blame-storming evades the problem and attacks the person. The more time we spend on apportioning blame, the lesser the time we have for solving the real problem.

CONFLICT IS A DEEP DEMAND FOR ATTENTION: Conflict is a demand for attention. Many relationships are suffering for what I will like to call Attention Deficiency Syndrome (ADS). Conflict ultimately puts a demand on us to re-arrange our priorities, re-evaluate our values and re-focus our attention on the things that really matter.

Real winners are not the ones that get favored or vindicated during conflict resolution, they are the ones that allowed the conflict to grow them! Seeing conflict as an opportunity for growth is the most dynamic and effective way of handling conflicts.

I have seen many heaven bound unions separate as a result of irreconcilable differences. The pertinent question to ask is this: Are there actually anything like irreconcilable differences? May be, may be not! My years of experience as a conflict coach has made me realize that every conflict can be resolved when we see it as an opportunity for growth. Some conflicts will never go until we grow! The best approach is to always outgrow the conflict.

QUOTE OF THE WEEK: “Conflict is not the problem, avoiding conflict is!”-Gbenga Adebambo

Continue Reading
You may also like...
Related Topics:conflict, dealing

15 Life Lessons From Black Panther Movie: We Are Our Own Rescue!!!
Canadian Doctors Protest Their Own Pay Raise While Nigerian Lawmakers Defend Theirs!