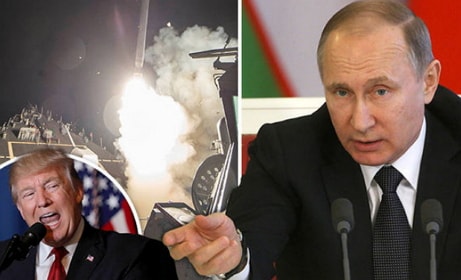 The Syrian Conflict: Is WW 3 Imminent?

The possibility of another World war is imminent if the crisis in Syria is allowed to spiral out of control: following last week’s chemical attack on Douma, America and a number of their allies have threatened to bomb key sites in Syria. Russia, a staunch ally of President Assad, on the other hand have threatened to retaliate by shooting down any Western plane or missiles and sink their ships if they do so.

This scenario is reminiscence of what happened in 1962 when America nearly went to war with Russia for placing nuclear missiles in Cuba. The stakes were high then and they’re high now. And somebody needs to back down.

Nobody is really sure what is going on in Syria. What started off as an uprising against the unpopular government of President Bashir al-Assad in 2011, soon became a civil war before progressing on to a free-for-all-fight with so many factions fighting each other. Iran, Iraq, Turkey, Hezbollah and the Arab League are all involved and so also are a number of known terrorist organisations providing combatants, logistics and intelligence.

When it comes to dealing with a crisis Putin and Trump are the least qualified presidents in the World: both are not diplomatic, they lack patience, they are impetuous and are most likely to open their mouths (- or tweet) first before putting their brains into gear.

Even though Assad has used chemical weapons on his people before it’s still unclear who carried out the attacks on Douma that left more than 70 dead. Until the culprits are positively identified, which could well be a terrorist cell operating within Syria, all intended military action should be postponed. Firing the first shot in anger is not always the best policy.

What is needed here is a full UN intervention: both Russia and American forces should be ordered to leave Syria immediately and replaced with UN peacekeeping troops from neutral nations.

At the same time a UN weapons team should be sent in to ascertain what chemical weapons Assad has and whether they were used in the recent atrocities – or what group is using them.

With Russia siding with Assad and the West backing one rebel group after another has only seen an escalation in the conflict, resolving nothing.

If Russia and America decide to go head to head, without a doubt the conflict will spill beyond the borders of Syria into international airspace and waters with each targeting each other’s planes and ships. If this happens there will be no end in sight.

We all know Putin and Trump are both hot-headed and are unlikely to back down from their threats, so hopefully a third-party nation will step in to quell the situation before it gets out of control.