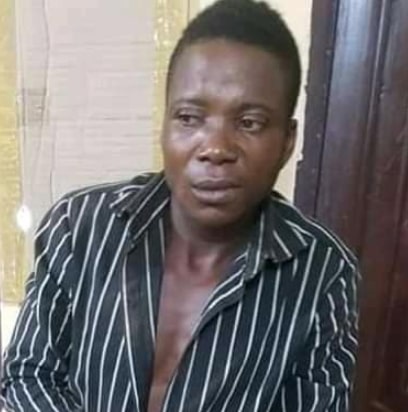 A man identified as Chizoba Nwoye has been arrested over alleged abduction and killing of a commercial tricyclist whose corpse was discovered in shallow grave.

Police spokesperson, Haruna Mohammed who confirmed this on Thursday in a statement, said the police recovered the corpse of the deceased, Dumebi Oforkansi buried in a shallow grave.

He said the 29-year-old suspect, a native of Achalla-agu village Nteje in Oyi LGA of Anambra State was nabbed following an intelligence report.

He said the accomplice in the alleged crime, Ezennia Nweke has been declared wanted.

He said, “On the 2/10/2019, a Keke rider one Dumebi Oforkansi ‘m’ aged 25 years of Ubarunisionye village, Nando in Anambra East Local Government Area was kidnapped by unknown persons and taken away along with his tricycle (Keke) while operating it for commercial purpose.

“The suspect confessed that he and one Ezennia Nweke ‘m’ alias ‘ABADA” aged about 25 years of Achalla-Agu allegedly conspired and killed the victim, buried the corpse inside the bush along Achalla-agu Nando road and made away with his keke.

Read Also; Shiites protest: Police ‘shoot’ schoolgirl in Abuja
He added, “Consequently, suspect has led a team of Police detectives to the scene where the victim was buried in a shallow grave and his decomposing body was exhumed.

“The body was certified by a medical doctor in the presence of the deceased parents who equally identified the clothes he wore.

“The body has been photographed and released to the deceased father for proper burial.”

Mohammed further revealed that the snatched tricycle has been recovered from one Anthony Charles alias ‘Walter’ ‘m’ aged 27 years from Ebonyi State.

“However, the principal accomplice one Ezennia Nweke alias is still on the run in order to evade arrest and has been declared wanted by the Police,” he stated.

He said the case is still under investigation after which both the murder suspects and the receiver of the stolen tricycle would be charged to court.

“The Command enjoins “Ndi Anambra” and residents alike with useful information about the whereabouts of Ezennia Nweke to contact the nearest Police Station/formations or call the Police emergency number 07039194332 for prompt action,” he added.

Continue Reading
You may also like...
Related Topics:anambra, killed, tricyclist