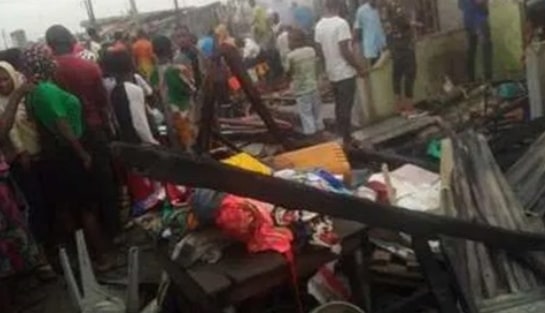 4 persons have been confirmed dead and 21 injured after a gas exploded in Ajegunle, a Lagos slum community.

It was gathered that the explosion occurred Wednesday evening at Aduke Street, Ojo Road, after someone received a telephone call inside a shop were cooking gas was being refilled.

Among those killed were three children and a woman said to have been burnt beyond recognition.

Another report indicated that the shop owner was allegedly shaking the gas bottle when it fell and exploded, escalating to nearby shops were occupants were receiving phone calls.

While two of the deceased including a boy Damilare Afolabi died at the spot, the other two were said to have passed on at the hospital they were rushed to Thursday.

According to a witness Balqess Adeniran, the explosion occurred around 5:33pm on Wednesday, adding that among the victims were hairdressers, apprentice and grocery shop attendants.

“The victims were rushed to Ajifat Hospital at Ohio Road, G-Tab, Titi Oluwa and General Hospital. A lot of properties were destroyed. Many people died too.

“It was the gas seller who received the call while selling gas. The fire jumped and affected other shops. Even people not staying in the street were among the victims,” she said.

Another witness Shola Abiodun said his three children got burnt by the fire, adding that they were rushed to the General Hospital for treatment.

“I was not around when it happened. A neighbour called me to rush down but did not say the reason. My three children were affected and they were rushed to the General Hospital for treatment,” he said.

A resident John Oracle lamented the lack of basic safety rules of most gas sellers in the area, attributing the explosion to ignorance on the shop owner’s part.

He also blamed the emergency response team for not coming in good time, adding that it was residents that rescued the victims.