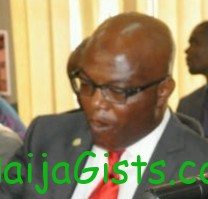 To a lot of people, most especially the members of staff of Lagos Inland Revenue Service (LIRS), this story is a common knowledge, but for people who don’t know, it may come as a surprise. naijagists.com

The cold war going on in LIRS recently has taken a new dimension as the director of tax audit, Lanre Adeniyi has been accused as being the one behind the malicious story aimed at removing the incumbent chairman of the agency, Tunde Fowler.

Lanre is said to be holding regular nocturnal meetings with some commissioners at Magodo area of Lagos in order to influence the Lagos State governor, Barrister Babatunde Raji Fashola to get Fowler removed.

Lanre is alleged to be hinging his fact on the erroneous belief that Fowler is spending the fund of the agency recklessly. Meanwhile, an investigation conducted recently at LIRS revealed that Fowler cannot access the account of LIRS as he is not even a signatory.

No one is sure of the outcome of this war but one thing is sure, the members of staff at LIRS and even people close to the agency believe Lanre is the one behind the crises being experienced lately.(global news)

Which pass which? They’re all trying to embezzle our national wealth