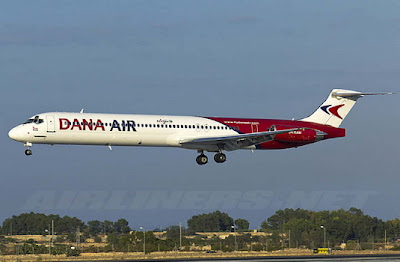 The Federal Government has ordered the immediate suspension of the operational license of Dana Airlines, weeks after the airline resumed from months of ban over the June 3 air crash that killed more than 150 people.

Senior Special Assistant (Media) to the Minister of Aviation, Joe Obi, said that the decision to suspend the airline’s operational license became necessary following unresolved issues bordering on safety in the its operations.

Though he would not shed more light on what the concerns are, he said the decision would remain suspended till all the issues are resolved.

“Yes, it is true the operational license of Dana Airlines has been suspended. What that means is that the airline’s operations have been suspended till further notice. The suspension will remain in place till all the issues are resolved. It might be tomorrow. It might be in two or three days’ time. But, for now nobody knows for how long it will take for the issues to be resolved,” Obi said.

A statement from the Dana airline’s management to its customers said the suspension followed a directive from the Federal Ministry of Aviation through the monitoring and regulatory agency, the Nigerian Civil Aviation Authority, NCAA.

“We regret to announce the temporary suspension of our flight operations following a directive from the Ministry of Aviation through the Nigerian Civil Aviation Authority (NCAA) on Saturday, 16th March, 2013,” the statement said.

No specific reason was given for the action, though the statement added that a meeting has been scheduled between the management of Dana Air, the Ministry of Aviation and the NCAA on Monday to attempt to resolve the issues.