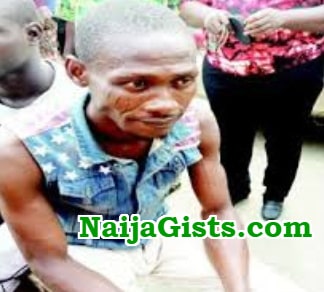 A man identified as Sagir Umar has been arrested for raping a four- year- old girl, claiming he was pushed into the act by evil spirits.

According to The Nation , 20 year old Umar lured the victim into his room with N10 in Abdulsalam quarters in Minna where he forcefully had carnal knowledge of her.

The suspect said he could not fathom how he came about having sexual intercourse with the minor.

“It looks like evil spirit is controlling my life otherwise why should it happen?

“Imagine myself sleeping with a 4- year- old girl. It looks ridiculous that I found myself in this mess.

“How do I explain this to my parents that I raped a girl of four?. The shame is unbelievable.”

Niger State Police Public Relations Officer, Muhammad Abubakar said the suspect was apprehended by a team of police detectives attached to Maitumbi Division after the victim’s mother reported the case.

He said the suspect had confessed to the crime during interrogation, adding the command would ensure that rapists have no peace in the state.

“We cannot allow rapists to take over Niger state; we will continue to arrest them and deal with them in accordance with the law,” he vowed.