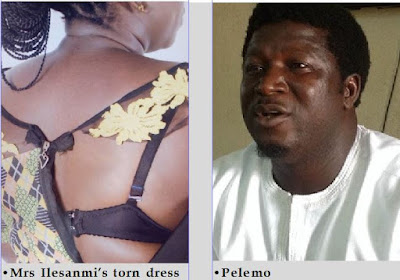 The Ekiti State International Federation of Women Lawyers (FIDA) has demanded the arrest and prosecution of a member of the House of Assembly, Dare Pelemo, for alleged sexual harassment and physical assault of a widow, Mrs. Mercy Ilesanmi.

The lawmaker was accused of fondling the breasts of the woman on September 6 at the Assembly complex.
Mrs. Ilesanmi said she raised an alarm but the lawmaker mobilised thugs to beat her.

The brutality, she said, took place in the Office of Majority Leader Mr. Tunji Akinyele, where she lodged a complaint on the alleged sexual harassment.

She said the hoodlums tore her clothes.

Ekiti FIDA Desk Officer Mrs. Kemi Atitebi said the organisation received the complaint against Pelemo but the legislator shunned the invitation to defend himself.

Nollywood Actress Hilda Dokubo: I Became A Rascal After I Got Admission Into University
Femi Adebayo Shoots 2 Cinemas Movies; The Return Of Jelili & Diamond In The Sky In Ilorin [PHOTOS]