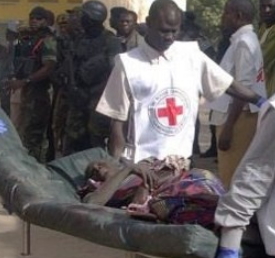 A 45 year old jealous man has burned his rival alive in Niger state for refusing to leave his fiancee alone.

The suspect Baba Mohammed is currently in police custody after setting ablaze Usman Tetengi, who he accused made advances to the woman he wants to marry.

He had warned the victim to stop seeing the woman he had proposed to marry, but the victim did not heed to his warning.

Mohammed confessed that he resorted to the crime because all pleading have proved to no avail declaring that he did not regret his action.

“I am not regretting my action because if I did not kill him at that particular time, he would have killed me, so let him go in his next world he will not join issues with me again.

“I am not married, I do not care where this case will get to, the most important thing was that I have closed his chapter and stopped him from troubling my life. There are other women in our community but he choose to be making advances to the woman I have proposed to marry. No, he has paid dearly to it, it suits him well.”

According to police investigation, he used 3 litres of fuel to burn the victim alive.

The victim was rushed to FMC Bida where he was later referred to another hospital where he gave up the ghost..