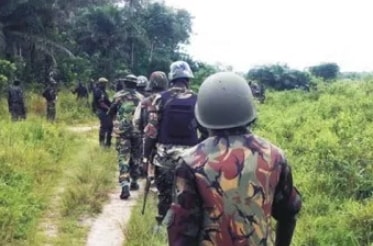 A gang of suspected robbers had in the early hours of Sunday ambushed and killed three operatives of the Joint Task Force (JTF), Operation Delta Safe (OPDS), around Letugbene creek in Ekeremor.

IYC, in a statement signed by its spokesman, Daniel Dasimaka, described the incident as a disgrace and betrayal of the Ijaw nation and the Niger Delta in general.

“The executives and members of the Ijaw Youth Council (IYC) worldwide, wish to unequivocally condemn this barbaric, vile, bestial and savage killing of three innocent and gallant soldiers by suspected buccaneers on the Tunu flow station, owned by the Shell Petroleum Development Company along the Letugbene waterways in Ekeremor local government area of Bayelsa State.

“We Ijaws are totally against sea piracy and all forms of criminality by these villainous foes of peace and progress of the Ijaw ethnic nationality.

“These bloodthirsty cowards who obviously run into hiding after carrying out their wickedness leaving innocent nearby communities to suffer the brunt for their actions are the enemies of our land that all Ijaws and lovers of the Ijaw nation must unite to utterly annihilate.

“We urge the military to resist the temptation to invade Bilabiri and Letugbene communities and other Ijaw communities, as it has been rumoured, in their bid to find the killers.

“Already, we have been inundated with distress calls from indigenes of Bilabiri and Letugbene communities informing the Council that soldiers visited their communities on June 19, 2018 and warned that they should provide some purported suspects who were alleged to have hailed from the two communities within three days or they will burn down the two communities. We gathered residents have started deserting the two communities to nearby bushes out of fear. This should not be.”

Continue Reading
You may also like...
Related Topics:bayelsa, killed, Soldiers