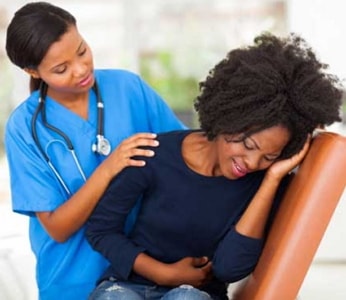 Slightly Over half of the world population are women. Experience of natural blood flow or otherwise called menstrual period starts in most women in about the age of 13, shortly after the breast development has started.

Dysmenorrhea is estimated to affect approximately 25 per cent of women.Reports of dysmenorrhea are greatest among individuals in their late teens and 20s, with reports usually declining with age. The prevalence in adolescent females has been reported to be 67.2 per cent by one study and 90 per cent by another.

The primary dysmenorrhoea is a result of shrinkage of the blood vessels of the womb lining which ultimately leads up to the shedding of the womb lining (called endometrium). It’s this shedding that results in menstrual period. During a woman’s menstrual cycle, the endometrium thickens in preparation for potential pregnancy. After ovulation, if the ovum is not fertilised and there is no pregnancy, the built-up uterine tissue is not needed and thus shed.

Molecular compounds called prostaglandins are released during menstruation, due to the destruction of the endometrial cells, and the resultant release of their contents. Release of prostaglandins and other inflammatory mediators in the uterus cause the uterus to contract. These substances are thought to be a major factor in primary dysmenorrhea. When the uterine muscles contract, they constrict the blood supply to the tissue of the endometrium, which, in turn, breaks down and dies. These uterine contractions continue as they squeeze the old, dead endometrial tissue through the cervix and out of the body through the vagina. These contractions, and the resulting temporary oxygen deprivation to nearby tissues, are responsible for the pain or “cramps” experienced during menstruation.

The secondary dysmenorrhoea is due to some other illnesses. Example of such illnesses is endometriosis which is the endometrium or womb lining that is found in wrong places, outside the womb lining area. Endometriosis may be inside the body of the womb itself or completely be in distant places from the womb. Each month, as the womb is shedding its lining, endometrial growth elsewhere will experience similar shedding. This shedding will not be expelled like menstrual period but over time will accumulate with blood: swell up and become painful.

Other causes of secondary dysmenorrhoea may be infection such as pelvic inflammatory disease (PID). Any agent that causes infection of the reproductive tract in a woman may lead to PID and dysmenorrhoea.

Yet, secondary dysmenorrhoea may also be due to fibroid which we discussed last week in this column. Other causes include ovarian cysts and abnormal body shapes.

Secondary dysmenorrhoea may come along with vaginal discharge which may be occurring prior to the commencement of menstrual flow. Pain may be an experience that occurs throughout time regardless of menstrual flow or not and sex may also be difficult. The victim may also suffer from swelling of the pelvis and abdomen.

In all, typically, the pain of dysmenorrhoea is often located in the lower abdomen and legs. Some women may experience headache, nausea, vomiting and may become generally unwell.

Investigations: A good history to the gynaecologist will reveal what sort of dysmenorrhoea is being dealt with. The doctor may advise ultrasound scan, do a vagina swab for infection detection in sexually active woman or in rare cases, perform and MRI is suspected cases of ovarian disease or endometriosis.

For primary dysmenorrhoea, simple pain killers such as paracetamol or ibuprofen (taken with food) and started one or two days before the bleeding starts as well as continued throughout the time of vaginal bleeding may help. In severe and troublesome cases, the gynaecologist may advise that the sufferer consider family control pills and or give strong pain killer. Childbirth may relieve and cure primary dysmenorrhoea.

Some women have told me that drinking a lot of water, elevating their legs, drinking tea, using hot water bottle on abdomen helps them. I can’t dispute these claims so long as the measures are helpful.

For secondary dysmenorrhoea, the underlying cause must as a matter of priority, be removed.

Endometriosis should be dealt with by gynaecologist. PID should be treated and effect of fibroid minimised. However, in any case, a competent doctor and or gynaecologist should be consulted in severe painful periods. It does not make sense to tolerate pains.

Continue Reading
You may also like...
Related Topics:menstrual, painful, periods

Amazing Health Benefits Of Apples: Why You Should Eat Apples Every Day
Household Products, Good And Harmless Things That Cause Cancer