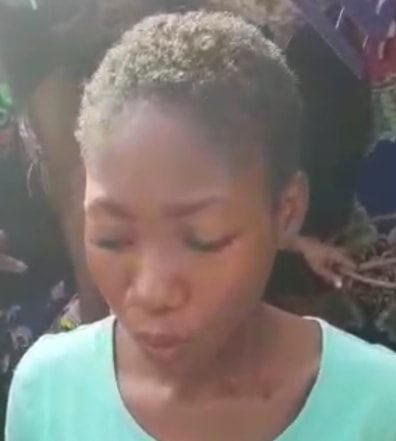 A girl simply identified as Hannah who killed her 70 year old boss last week has confessed.

The 14-year-old had earlier lied that it was a four-man gang that stormed their residence and killed the woman while attempting to also rape.

She later recounted after being subjected to series of questioning.

Speaking to newsmen at the Edo State Police Command, Hannah said the spirit threatened to kill her if she did not lie about the incident.

Her late madam is said to have been down with stroke which made her children to engage Hannah four months ago to care for her.

Hannah said she washed clothes, gave her madam food and ensure the victim went to bed.

“There is one of her friends that usually come around and when she comes, she sends me an errand. After washing the clothes, I went out.

“Some uncontrollable forces came upon me like breezy. So I lost my senses of what I was doing When the spirit entered my body

“I left the dishes I was to wash and went straight to stand on a stone. I later went inside the room where I discovered that my mistress was still sleeping so I hit the stone on her head and she died.

“So, I scratched my head and turned around four times before I regained my sense.

“So when I saw that I have killed her, I held her and started crying in her pool of blood”.

Hannah said she is in JSS II at Itohan Girls Grammar School and that she was brought from Abuja to assist the deceased.

She said the spirit warned her not to tell anyone and that if she does, she will die.

Police Commissioner, Babatunde Kokumo, said investigation was still on to ascertain whether other culprits were involved.