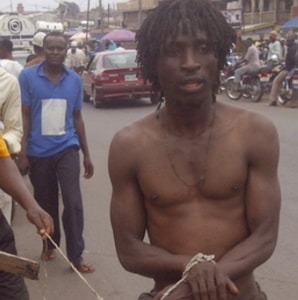 There was palpable tension in Oba Aguleri in Anambra East local government area, Anambra state following alleged gruesome murder of a native doctor by a man suspected to be mentally unstable in the area.

The murder was said to have triggered protest leading to destruction of properties worth millions of naira while business activities were apparently shut down in the area.

We  gathered that trouble ensued when the native doctor [name withheld] tied a goat bought for spiritual sacrifice to a tree and went into the market to pick other items, but could not find it soon after his return.

A resident of the area, who preferred anonymity, said the native doctor enquired about the whereabouts of his sacrificial goat as soon he noticed its sudden disappearance.

“He was informed that a wandering madman untied it and took it to his house few kilometers away.

“They gave him direction on how to reach the lunatic’s house and he went straight to the place without fear of attack as he relied on the efficacy of his charm.

“When he got there, he met the madman already making advance plans to slaughter the goat for a meal.

“While he was still demanding to know the reason the madman took his goat, he quickly dashed into his room and came out with a machete.

“The native doctor took to his heels on sighting the machete in the hand of the madman,” he said.

The resident who said the mad man ran after the native doctor, however said the madman caught up with him and macheted him severally after he fell down.

“The native doctor bled to death before help could reach him,” he added.

The Nation further learnt that irate youths in the area immediately mobilized and headed for the madman’s house to avenge the killing of their kinsman.

It was also gathered that the crisis would have degenerated to further communal crisis but for the prompt intervention of security operatives who arrived the scene following a distress call.

When contacted, the State Police Public Relations Officer, Haruna Mohammed, confirmed the incident, saying the suspected murderer and three other suspects had been arrested, linking the rampage to the death of the native doctor.

His words, “the man that killed the deceased had been arrested with three others making a total of four suspects “.