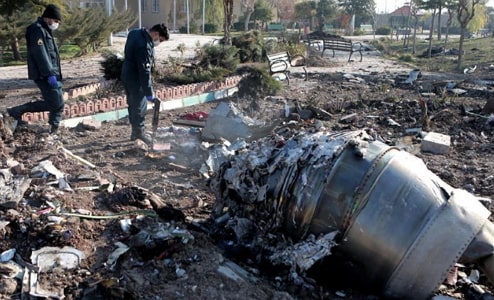 Did Iran Shoot Down Ukrainian Plane With 176 People On Board

A Ukrainian plane crashed shortly after take-off from Tehran on Wednesday, bursting into flames and killing all 176 people on board.

Debris and smouldering engine parts from the Boeing 737, which carrier Ukraine International Airlines said was last serviced two days ago, were strewn across a field southwest of the Iranian capital where rescue workers in face masks laid out scores of body bags.

The airline noted that most passengers were in transit.

The accident occurred as confrontation between Iran and the U.S. threatens to trigger a wider conflict in the Middle East, and officials cautioned that speculation about what happened was premature.

It was the Kiev-based carrier’s first fatal crash, and it said it was doing everything possible to establish the cause.

“Our hearts are with the loved ones of the victims.

“We will continue to keep Canadians informed as the situation evolves,” he said on Twitter.

Under international rules, responsibility for investigating the crash lies with Iran, and Iranian state television said both of the plane’s black box voice and data recorders had been found.

The semi-official Mehr news agency quoted the head of Iran’s civil aviation organisation as saying it was not clear which country Iran would send the black boxes to analyse the data, except it would not give them to Boeing.