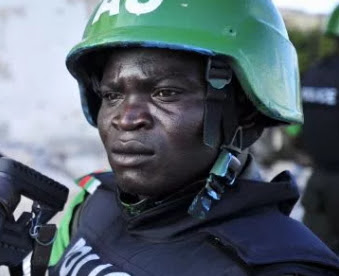 A DPO attached to the Delta State Police Command has been reportedly kidnapped by armed men along the Benin-Asaba-Onitsha Expressway in Asaba, the state capital.

The DPO, who sources simply identified as Mbanu and was said to be heading one of the divisions of the Asaba area command, was abducted while returning to the state capital from Agbor in Ika South Local Government Area of the state on Sunday.

A dependable source within the state police command, who confirmed the abduction to our correspondent on Monday, said a five-man armed gang carried out the abduction and his whereabouts remained unknown.

Sources within the command gave the rank of the abducted senior police officer as a superintendent of police.

“I can’t give you the name of the kidnapped officer but the abduction took place on Sunday along the Agbor-Asaba axis of the highway. He is a DPO under the Asaba Police Area Command of the Delta State Police Command.

“The gunmen didn’t know that he was a senior police officer at the time he was waylaid and kidnapped by arms-wielding men numbering five. The command has been holding meetings since morning on how to rescue the officer and we were warned not to disclose his abduction to pressmen.

“We learnt that the kidnappers have contacted the family but I don’t know how much the ransom is. The command is trying to keep the incident under wraps pending ongoing operation to free the victim,” one of the sources said.

“The life of the officer is in danger. If the gunmen get to know that he is our colleague, they will kill him. Secondly, the matter is being shrouded from the public; it does not speak well for the image of the Nigeria Police Force.”