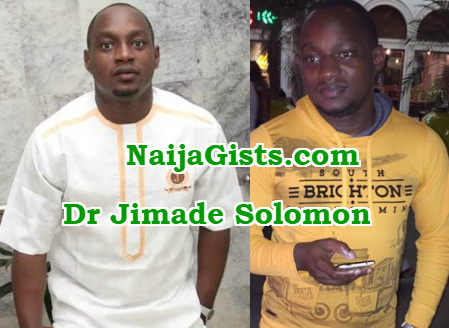 I was motivated by the article titled “The Dr Jimade Ola Solomon I know is not a criminal”. I read it over and over again on Naijagist blog. I was happy to see someone was bold enough to write and stand up for his persona. I can categorically say I am in support of the writer’s opinion 100%. Something is wrong somewhere, something isn’t adding up.

I know Dr. Jimade Ola Solomon very well, we are good friends and I have known him for more than 25 years. He is from a wealthy background, he attended Bols nursery and primary school, Igbinedion education centre, Ronik Comprehensive School, and then the University of Ilorin; and performed academically well in all of these societies.

I am sure none of these institutions have reported any case to show tendencies of criminal/nefarious actions/tricks when he was in attendance. Psychologists ascertain that criminal tendencies must show in an individual’s life during these stages.

So, where did Dr Jimade Ola Solomon learn how to shoot?

When did he learn how to live and hide in the bushes rather than the comfort of his home?

The most baffling of all is when he learned to mix with the hooligans put on the newspapers to discuss business rather than the elite/polite people with which he is known to mix with all his life.

Dr Jimade Ola Solomon has never been arrested or assumed to be a criminal from childhood. His wife works in a well-established firm; he is financially balanced, manages his own business, and travels around the world like any other Nigerian during vacations.

Why would he risk his life on the highway or in the bushes to snatch cars?

Why would he risk his beautiful home for cars worth less than a million naira?

I was with the Doctor a while back in his hospital during a visit to Abuja and I was privy to find out that he had in his possession millions of naira given to him by an uncle, one of the big contractors in Abuja for safe keeping. I’m referring to over a 100 million naira to be precise.

He had visas..so, why didn’t he divert funds and run away? After all, his assets (business and property) are worth far less and he can easily do away with them.

How many cars would he snatch to get a 100 million or more?

How many used cars can bring about 100 million naira or more?

He must have been stealing from secondary school or birth, coordinated all the car theft at the University of Ilorin hostels and Abuja would have lost all their cars to him, about 2500 cars in all I guess.

Why didn’t the police arrest any registered staff of the hospital in connection with the crime?

How come guns and a mask were found in his office and not his home?

If he coordinated the robberies why should he be the one to keep the tools considering how smart he is?

If he coordinated the robberies, did he have to be in Nigeria to make sure it happens?

How come only the so-called James robs with the Doctor?

How did he share the loots? Was it physically or through bank transfers?

MTN please show the public a call log of his messages and call since from the inception of his main line (07036104648) and let the public see or know if he communicated with these hoodlums in the newspapers.

Banks with his BVN please show the public transactions with these acclaimed accomplices? Where are the bank statement proofs?

If a normal citizen can ask these questions, isn’t more tasking for the Nigerian police to have exceeded these and established their claims? But they won’t, why? The system is maligned with a lot of lies:

Police is your friend, scoffs…

It is on record not farfetched, that the police at one time murdered an innocent citizen (a bank manager to be precise) and placed robbery allegation on him only for the truth to surface later though it was too late.

The biggest question is: what has this young promising doctor done to the police to deserve this slander and assassination of character?

I place this case before the Almighty God and reasonable thinking Nigerians. No matter how deep truth is buried, it still remains truth.

I puncture allegations by the police that Dr Jimade Ola Solomon is a criminal. He is a law abiding and medically established citizen of Nigeria, not a criminal as presented by the Nigerian police.