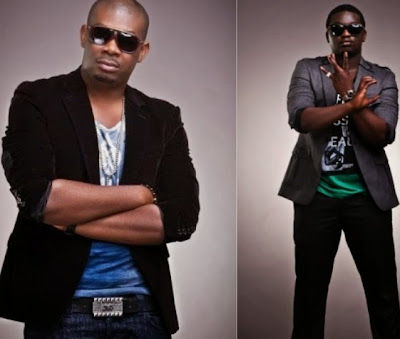 The last 24 hours hasn’t been easy for fans of Mavin Boss Michael Collins aka Don Jazzy and his label star Wande Coal after the duo took to Twitter to curse each other out.

He took to his popular Twitter page yesterday to say:

“How long will i continue 2 sweat and some people will choose to steal from me. I am nice and easy going doesnt mean u should disrespect me
OK THIS IS A STUDIO DEMO I MADE ABOUT A YEAR AGO. DON JAZZY – #BABYFACE”

I honestly expected y’all to come at me with me being childish. But enough is enough. even if i send my legal team on him una go complain 2.
I can decide to shut him down with one call. but didnt. all i ask for is “give me my credit” and nothing else.

For the past 24 hours, the duo have been exchanging words on Twitter.

After the release of Wande Coal’s video “The Kick” which had no indication of Mavin Records, but Wande’s record label Black Diamond Ent., the streets started talking.

This move allegedly upset Don Jazzy who took to Twitter within hours to accuse Wande Coal of stealing his song.

Don Jazzy said he is the owner of the upbeat song he produced last year.

Who are we to believe now? Hope they will sort out their differences and stop washing their dirty linen in the public.

Listen to the Baby Face song causing the wahala below: