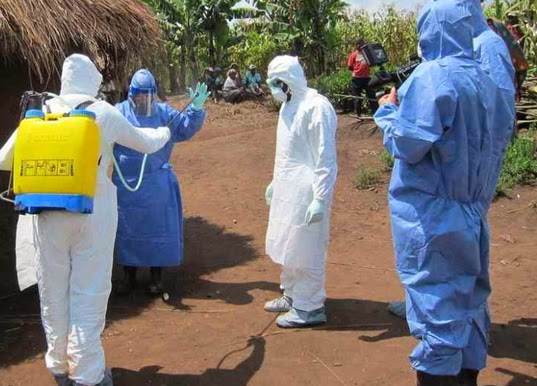 A British national displaying Ebola-like symptoms died in Macedonia on Thursday, health officials said, cautioning that the diagnosis could not be confirmed until a German lab had completed its analysis.

“A British citizen on business trip to Macedonia died,” the health ministry said in a statement.

“Because of his serious health condition at the moment he was admitted to the hospital, including vomiting and internal haemorrhage, as well as because of his sudden death, we believe he might have had symptoms of Ebola,” the ministry said.

Britain’s Foreign Office said it was investigating the case.

“We are aware of reports and are looking into them,” a spokeswoman said in London.

To help confirm the diagnosis, “samples were sent to a German laboratory” and the test results will be known within 48 hours, the Macedonian health ministry said.

The Briton was taken to Skopje’s hospital for Infectious Diseases after the hotel where he was staying called the emergency services, health ministry spokeswoman Jovanka Kostovska said.

He complained of stomach pain and “refused to eat or to see a doctor,” she said.

The patient was admitted around 3:00 pm (1300 GMT) and passed away shortly afer.

The Skopje hotel where he was staying was sealed off and those thought to have had contact with him were put under quarantine.

Health officials did not name the victim, saying only that he was born in 1956.

The man arrived in Macedonia from London on October 2 and was not thought to have travelled to any countries affected by the Ebola virus, his friends were reported to have said.

The current Ebola outbreak, the worst on record, has claimed nearly 3,900 lives since the start of the year, mainly in Guinea, Liberia and Sierra Leone.

A nurse in Spain this week became the first person to contract the killer virus outside Africa, after caring for two repatriated Ebola patients at a Madrid hospital.