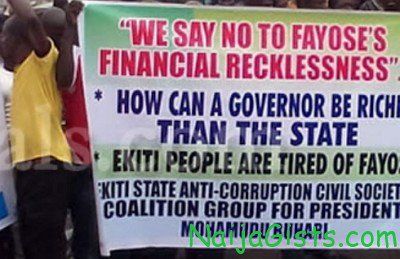 Ekiti state civil servants today shunned the reception organized by Governor Ayo Fayose to welcome the Commissioner for Finance, Chief Toyin Ojo and Accountant General, Mrs. Yemisi Owolabi back from the detention of the Economic and Financial Crimes (EFCC).

According to The Nation, the governor had declared Thursday as “half working day” and directed workers to troop out in large numbers to welcome Ojo and Owolabi at Fajuyi, where reception was scheduled.

Rather than going to Fajuyi to welcome the duo majority of the civil servants had left their offices for their various homes as early as 11.30 pm. Some of them who spoke with our reporter said they can’t welcome the EFCC detainees because they are hungry.

“We can’t go to Fajuyi to welcome the Commissioner and Accountant General because doing so is against civil service rules which forbids us from participating in partisan politics.

“Besides, we are being owed six months salaries while our counterparts in local governments are owed nine months. A hungry man is an angry man, the governor should find ways to pay our salaries I am on my way home now,” a worker told our reporter.