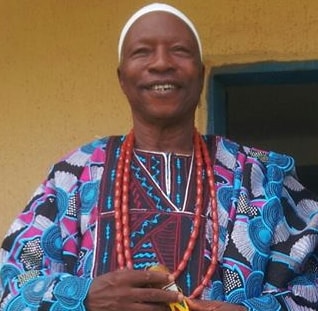 Ademola stabbed Oba Ogunsakin, the Onise of Odo Oro in Ikole Local Government Area to death with a knife on Monday.

80-year-old Oba Ogunsakin, who was enthroned in 1986, was stabbed to death in his palace on Monday after chairing a meeting of his council of chiefs in the palace.

The suspect thrust the knife into the monarch’s chest with the victim giving up the ghost before reaching the hospital.

He fled to Ado-Ekiti after committing the regicide but was arrested at Ajowa Market in Dallimore area of the city around 4.30 pm same day.

Speaking while being paraded alongside suspects arrested for various crimes at the police headquarters in Ado Ekiti on Friday, Ademola, who is in his 40s, said he committed the regicide to claim his “right.”

Ademola, who spoke correct English and never showed any sign of insanity, was said to belong to another royal family in the community.

He claimed that his family had nominated him to take over from the late king whom he said was serving as a hindrance.

“The crown didn’t belong to Oba Ogunsakin because the town last year declared vacancy because of the death of our Oba.

“They said our Oba was dead and my family nominated me to take over only for him to resurface again and said he remained the Oba.

“Last year December, my family nominated me and since then I have been trying to take over. That day when I got to the palace, it was the late Oba that first attacked me and I attacked him back which led to his death.”

The Commissioner of Police, Mr. Bello Ahmed, had earlier addressed a press conference on the recent breakthroughs recorded by the command in arresting the suspects.

The police chief dismissed claims in some quarters that the suspect is mentally unstable.

“I am not a medical expert to know who is mentally unstable or not.

“But the fact remains that, how could a lunatic committed murder and ran over 100 kilometers from the scene of the incident?

“So, common sense dictates that he must have known what he was doing to have run from that town to Ado Ekiti.”