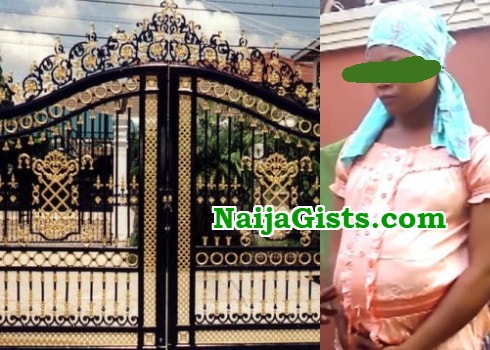 A boy has allegedly impregnated a 15-year-old maid in Nkpo area of Anambra state.

The illicit act was reportedly carried out on top of the bed of the victim’s master while he was away.

According to the Nation, the gateman, a junior secondary school student of a private school in the area, has been in a secret love affair with the suspect.

A resident of the area, who simply identified himself as Anthony, said the suspect, a secondary school leaver, usually sneaked into the apartment to sleep with the victim in the absence of her master and the wife.

He however added that luck ran out on them when it was discovered that the maid was pregnant.

“The illicit relationship went on unnoticed until the girl’s pregnancy became noticeable, and when she was accosted, she mentioned the boy’s name,” Anthony added.

Narrating her ordeal, the victim confessed how the suspect took advantage of the master’s absence and his wife to have sexual intercourse with her.

“He frequently visited me after school hours when my oga and her wife were not around and the fun normally took place on my oga’s bed,” she said.

She added that they preferred the master’s bed to that of the madam for the act because of what she described as the “care-free attitude” of the master.

“As a woman, my madam will easily know that the bed was touched but my master does not have time for such matters,” she added.

We further learnt that the mother of the victim, who resides in Orlu, Imo state, had attempted to broker a marriage with the lover boy immediately the development was communicated to her.

The efforts were however unsuccessful, as the suspect’s parents declined the offer, arguing that their son was too young to take up such responsibility.