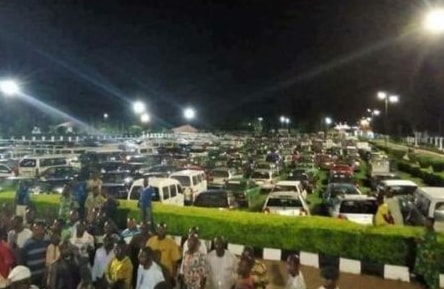 Residents of Ekiti State today ingnored the order of Governor Ayo Fayose to stay at home as the All Progressives Congress (APC) holds its final mega rally.

Fayose had on Monday night directed commercial drivers and motorcyclists to withdraw their services from the roads on a day President Muhammadu Buhari was visiting.

The governor also ordered that major markets in the city be closed and residents stay indoors.

Many commercial drivers parked their vehicles at the Government House lawn where Fayose an all night party held. He also promised to give each driver that complied N10,000.

He claimed that he took the action to prevent the killing of his people by Buhari’s men whom he alleged were ready to spill blood.

Fayose said the transporters would remain indoors until 4.00 pm when the APC rally would have ended.

Normal commercial activities went on unabated on Tuesday with a good number of commercial drivers and motorcyclists plying their trade.

Market women had thronged Oja Oba and Bisi Markets as soon as 6.00 in defiance of Fayose’s order that the market be closed.

APC members were seen in many parts of the city trooping to the Oluyemi Kayode Stadium venue of the rally.

A motorist who was apparently angry with Fayose’s late night order said nobody could stop him from pursuing his livelihood.

“Fayose is only afraid of his impending and unavoidable defeat, and that, that is the reason he is trying to do everything possible to frustrate the opposition parties in the state.”

An Okada rider said: “Just to ensure that we do not come out to work today, he told us to come to NNPC on Bank Road on Monday night to collect 2 litres of fuel each, he also told us to come to Government House to eat food. This is very ridiculous and low of a state government.”