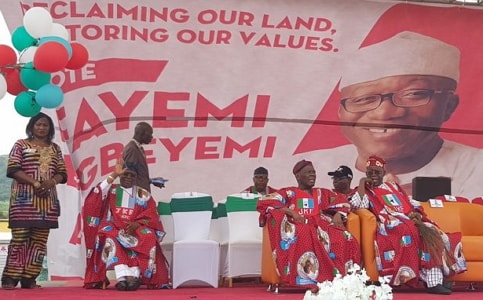 APC Is A Pain Killer, Take APC To Ease Your Pain – Says Tinubu As He Campaigns For Fayemi In Ado Ekiti Today

The All Progressives Congress (APC) party National Leader Tinubu has accused the Peoples Democratic Party (PDP) of stealing all the money in the country before their regime was terminated.

Tinubu who was heralded into the Ado Ekiti in grand style by a crowd of youths, accused the PDP members of shouting loud over the problem they caused Nigerians.

He also accused them of causing the nation’s problem through the perpetration of corruption and are shouting louder.

“They are shouting that prices have gone up; we say yes because they ate the breakfast of their children,’’ Tinubu said at the grand rally of his party held in Ado Ekiti for Chief Kayode Fayemi, the party’s candidate for the July 14 governorship election.

Amidst ovation from the crowd, Tinubu said:

“If you eat everything in a yam, there will be no food for the children.’’

“They stole all the money. They talk of high exchange rate. PDP is a party of destruction. It is “Poverty Development Party’’.

Commending President Muhammadu Buhari for his effort at rebuilding Nigeria, he said: “It is not easy to rebuild what has been destroyed.’’

Recounting the nobility and honesty of Buhari, he said that President Buhari then built three refineries which PDP tried to dismantle and sell.

“One old man, baba, at the back of my house; I am from Lagos started dismantling the refineries and wanted to sell them.

“The old man brought turbines for electricity, but did not provide pipelines for the diesel to the turbines.’’

Asking Ekiti people to vote for Fayemi and be free from the pains inflicted on them by PDP, Tinubu said:

Here is what he told a huge crowd today at the Stadium in Ado Ekiti.

“APC is a pain killer. Take APC to ease your pains.’’

“Do not allow anybody to intimidate or make you afraid. You are protected and you will be protected’’ .