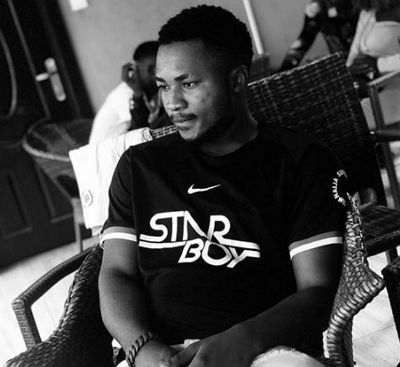 When he collected the car keys on that fateful afternoon of April 1, 2018, he had no inkling that Fate would teach him a very valuable lesson that many of us today give no attention. That only a thin line separates life, which is a gift, from death.

Abdulsalami Gbolahan Ridwan was born 24 years ago into the Abdulsalami family of Oshogbo in Osun State. Popularly known as ‘Mr. Exponent’ among his fans and friends, Gbolahan realized his mission in life early enough. By the time he started his primary education and later proceeded to an Islamic College in Ede where he bagged his Senior School Certificate, he had already known that promoting creativity through music was what he wanted to do.

Though his father insisted on studying Business Administration at Osun State University Oshogbo where he is currently a final year student, he didn’t drop his pursuit of music.

April 1st. The naming ceremony of his younger sibling was in full swing in the house. The drinks were almost out, and his dad had instructed him to go get more drinks from his Lounge and bar in another area of the city. In company of his Manager whom he had come home with from school the night before, Gbolahan took one of the cars in the house and they set out.

Minutes into the journey however, they suddenly heard a loud blast from underneath the car. One of the tyres had exploded. Almost immediately, Gbolahan lost control of the car and the next series of events happened so fast that he and his friend could have been watching a scene from an action movie. The vehicle violently skidded off the road, somersaulted a number of times before coming to rest in a ditch near the expressway. Miraculously, Gbolahan and his friend came out of the almost mangled car totally unscarred, so that the crowd that quickly gathered around them started looking for the passengers in the vehicle, and even refused to believe that the duo had actually emerged from the car.

Although he admitted to me that it was a clear case of inexperience, over speeding and lack of proper check of the car before leaving home, a recent World Health Organization report says Nigeria records 33,700 deaths in every 100 million people living in the country annually.

Although this report led Saraki’s Senate into passing a motion on the pandemic rise of road traffic accidents in Nigeria, a lot still needs to be done by the Road Traffic Officials, road users and the government who must do its duty to fix our roads.

The accident greatly shook Gbolahan who narrated how it became a lasting lesson for him. King David writing in the book of Psalm 90:12 say: “Teach us to number our days, that we may gain a heart of wisdom.”  Unlike many of us today Gbolahan realised from that day that time is limited and life is too short to waste it.

There are not so many hours in a day, and there are only so many days in our lives. If one lived for 70 years for example, that would have amounted to about 26,000 days. Now this may seem like a lot of time, but compared to eternity, it is but a breath. So we must pay attention to the things we do here today, because it is our actions here and now, that would echo into eternity long after we are gone.

Though he choose his path early, April 1 changed Gbolahan’s mindset radically so that it led him into the decision to make his life count by giving value to his time.

So, the experience gave birth to ‘Exponent Life in Concert ELIC’ programme. Rallying around a few friends of like minds, Gbolahan started a process that would bring student from across Nigerian universities, starting from Osun State University, together, to promote creative the arts like music, acting, writing, fashion etc, through talent hunt and award giving so as to support those who are making a mark and to encourage those who have dreams to take action.

The maiden edition of ELIC was held in 2018 in Oshogbo and it attracted students as well as well meaning Nigerians and corporate organisations who support the arts in their hundreds.

Now, in toeing this path, Gbolahan has done nothing different from what many young Nigerians, who are making impact, are doing.

For examples, Precious David-Gaga from Delta State, a graphic editor and lover of music who organizes capacity development training programmes in campuses, whose work is making positive impact on young people within and outside Warri, readily comes to mind.

There is also Ayodele Taofiq-Fanida, who is determined to take entrepreneurship to another dimension, and has authored two fund-raising books and founded the ‘Save Our Community Afrika’, a youth led community based project in Lagos, and a host of others that space would not permit us to mention here, whose names we don’t often get to hear.

Now, the difference between Gbolahan and these youths is that, with ELIC, Gbolahan is trying to make the point that entertainment merged with education can indeed be used to remove our youths from crime.

And true, ELIC Season I showed us all that like an on-again off-again romance, education and entertainment have a long-standing relationship which some experts call “edutainment.”

Although some have argued that while “education aims to cultivate maturity, responsibility, knowledge and growth… and good education trains us for employment, for good citizenship, and for a deeper, more meaningful human experience… entertainment aims only to amuse, and holds no prejudice against meaningless fun…”

While this may appear true on the surface, the truth is that education and entertainment often overlaps and we can enjoy the best of both worlds: rich delights and profound learning. The fact that education studies the arts and educational games and the work of youths like Gbolahan within our educational system is proof that “Edutainment” is a new phase in our national life that the authorities must begin to look into.

Yes, I concede that entertainment is not the goal of education, but it is still important as the best motivator there is, and learning only happens when people are motivated. We have seen how the artistic skill of youths like Gbolahan has brought education and entertainment together in a way that inspires students.

And despite the rot in our education system, and the challenges Gbolahan and his team faced in the maiden edition of ELIC, it appears students, starting from Osun State University, are prepared for it.

Our universities are plagued with obsolete infrastructure, and despite the intervention from government agencies such as Education Trust Fund and Tertiary Education Trust Fund, most universities cannot boast of standard laboratories, qualified lecturers and world class classrooms. To add salt to injury, ASUU embarks on strike at every blink of the eyelid. Now, what sort of products do we expect from such institutions?

Yet despite these challenges, youths like Gbolahan brave all odds to make impact. And in recognition, Gbolahan was awarded the Rotary Award for ICON of the year 2018, Best Entertainment Manager by Uniosun and a host of others. Inspired by this, Gbolahan has gone on to co-found Kelvin and Gbolahan (K&G) Entertainment, and is currently serving as manager of AMA Sound Nation, and all these has not in any way affected his academics negatively.

Experts upon experts have argued that the entertainment and media industry, with a total revenue of 3.8B USD annually, is the future, and so, while calling on Nigerian youths to key in to this I also call on the authorities  to explore better ways of exploiting “edutainment” for the benefit of our youths.

Because in the end, the question we would ask ourselves would be; “Which path do I want to take, my own… or someone else’s?” Because we have seen people regret on their deathbeds why they did not live a life true to themselves instead of one for others, I think the duty of every youth who reads this today should be to discover purpose and pursue it. It’s not too late to start, you can start today, to live for yourself, to pursue your dreams right where you are, and with what resources you have.

Therefore, the lesson we must all take from Gbolahan’s experience is that life is too short to live it for others. People may or may not accept your dream at first, but pursuing it is still what you must do if you want to be happy and fulfilled.

Albert Afeso Akanbi is a writer, filmmaker and humanitarian. He lives in Abuja, Nigeria.

True Story: How Horror Led Me Into Filmmaking
The Child Abuse Practice Of Naming Kids Witches In Nigeria Must Stop Now, Enough Is Enough