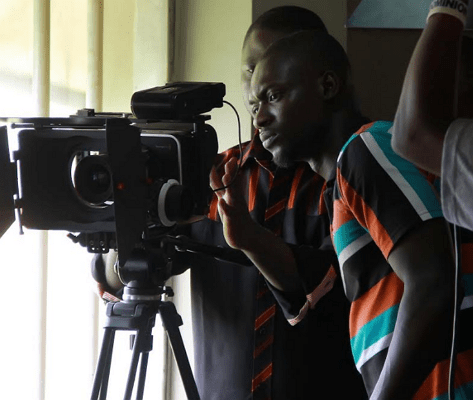 TRUE STORY:  “HOW HORROR LED ME INTO FILMMAKING”

Vessel joined the other group of students in their frenzied rush for the school gate. Mayhem had taken over the entire campus and it was as if demons from Hades had literarily taken over Government Technical College, Malali. Behind, machete and gun wielding militia assailed them and their only means of escape was the school gate in front of them.

Earlier, he had trekked miles to find his friends, and was thoroughly exhausted. But who would see or sense the slightest traces of danger and not find strength from nowhere? His group comprised of unkempt, hungry and haggard looking boys and girls who had to run because their lives depended on it. As they emerged into the deserted streets opposite the college gate, the spectacle that greeted them was that of palpable horror:

Two creatures had been crucified. One was an adult male from whose well tailored outfit and pastoral collar; one could tell was a pastor in his mid forties. He was crucified in an X shape with his legs and hands spreading apart. His head was chopped off. Next to him was a robust pig impaled on a long spike the length of the cross in which he was crucified. Its head was chopped off too. Swapping the heads, the killers neatly placed on the dead man’s blood stained neck the pig’s head, and on the pig’s neck was the man’s head.

Upon sighting this spectacle, morbid fear rose from the pit of Vessel’s stomach, ploughed upwards until it settled in his mouth, and then he began to vomit…

What were the events that led to this horrible sight? How did Vessel’s story begin?

In February 2000, Kaduna State Government joined some northern Nigerian States to announce the introduction of the Shari’a law. The almost half Kaduna State Christian population, led by the Christian Association of Nigeria (CAN), organised public protest in response. Muslim youths then clashed with the protesters and the situation spiralled out of control, leading to massive violence and destruction on both sides.

The violence left many dead and properties worth millions of naira destroyed. A judicial commission was set up by then Kaduna government but eventually, the army interfered to end the bloody clashes when it became clear the police could not control it.

Vessel was born Johnson Oluwatosin Adewumi to parents from Ijebu-Jesha in Osun State over three decades ago. He was born in Lagos but raised in the town of Kakuri in Kaduna State. Though at age 11, he had begun to toy with the idea of storytelling, it was events that shaped his life in Kaduna that gave birth to the decision to go into film making full time.

At age 14 he gained Admission into college in Malali. Although Malali could be described as another average northern community with all the attendant attributes usual of the north, it had its own fair share of religious extremism. That was why when the whole brouhaha about the Shari’a debacle was happening in the State, sceptics believed it wouldn’t be long before violence found its way into the campus of the technical college.

Though Muslims insisted that the law would only apply to them, the activities of some extremists and rumours that Christians were being asked to adhere to the law quickly circulated within the campus.

Vessel narrated how the Christian students, who, initially were indifferent, decided to begin a protest. The Muslim students decided to organize counter protest, and the two groups clashed. The ensuing crisis spiraled out of control and the school chapel was burnt. The Christians retaliated by burning the school mosque. Then things degenerated, hostels were burnt, offices ransacked and so on.

By now, the school authorities had been rendered powerless, because the crisis unfolding in the State had ensured that there was little or no attention given to the college. Vessel related how he and a group of Christian boys who were going on a revenge fight against the Muslims were routed. Before they realized the level of danger they were in, a local weapon, the barandami, was released by one of the militia and it got the head of the boy standing right beside him. The boy dropped on the floor with a thud, and seeing blood gushed out of his head, Vessel and the others escaped in all directions. He recounted how he barely escaped with his life and confessed how he and the other boys could not have the heart to tell the mother of the deceased how the poor boy met his end.

By the time he miraculously found his way home, he found that the violence had reached his home and their area had become like a huge abattoir of slaughtered humans beings. He related how his uncle helped them escaped, driving over charred remains of human beings.

The 1992 Zango Kataf crisis, over three Shari’a crises, the Danish cartoon debacle and the Miss World crisis that saw the burning of Thisday newspaper office which ironically was domiciled in Malali, all joined to ensure that before he came out of his teenage years, Vessel had witnessed so much horror to last a lifetime.

For years, the images of the terror he witnessed left a lasting scar so that even when he arrived Ile-Ife in Osun State, it appeared he needed treatment to get over his depression. Although increasing evidence has proven that exposure to violence could significantly impact a child’s mental health, Vessel insists it was God who saved him from a major mental crisis.

By 2007, knowing how effortlessly he could by then write, added to a keen eye for good pictures, when he was coincidentally asked to write a script on the horrors of war, as the then Drama Coordinator of The Polytechnic, Ile-Ife, where he was by then a student, it dawned on him that storytelling and film making was his destiny. That was the turning point…

Ever since, it has been one success story to the other. For example, in July of the same year he produced the movie, “Oh! My Destiny”, which prompted his invitation to join the Christian drama organization ANCENDRAM. Soon, Mnet invited him to work on an Africa Magic series, DoGood, as Continuity Manager 2. Then in 2018, he made the list of finalists of the Script 2 Screen Africa competition, earning him the award of Best Screen Play for his short film “The Catalyst”. Till date, he has worked with many directors in over 50 movie productions.

Vessel agrees with me that the Nigerian film industry Nollywood, is undoubtedly helping create jobs in our country with an economy that relies mainly on oil and agriculture. In fact, with millions employed, it is the country’s largest employer after agriculture.

Though its revenues are not at par with Hollywood and Bollywood, Nollywood produces over 50 movies weekly, which is second only to India’s Bollywood and more than America’s Hollywood, raking in an impressive 590+ USD million annually.

This is why well meaning industry experts have called on the government to properly manage the industry because it has shown that it has the potential of taken many more millions of our youths out of the streets.

At least for Vessel, rather than using the economic situation of the country today as excuse to join many youths in social vices like Yahoo Yahoo, drug abuse, thuggery, cultism, inaudinate ambition, and sexual abuse and so on, he has decided to go into movie making, a thing he believes he can use as a weapon to preach love, unity and peaceful coexistence among the youths. 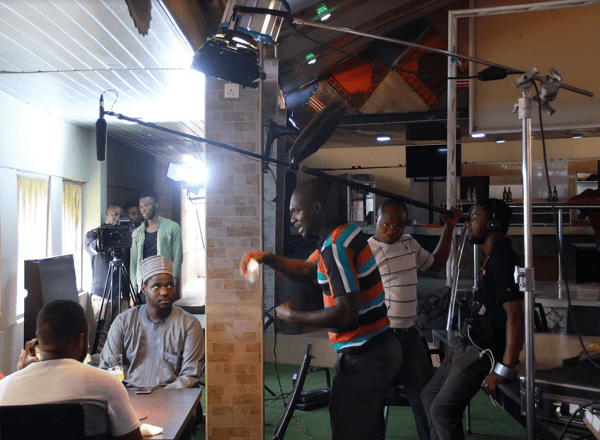 Religious and tribal differences have been the bane of our existence as a people. And many of our malevolent politicians and leaders understand this, and so have in fact used these two fault lines of ours to their own advantage. And this has led to countless deaths.

The average Nigerian just wants to be happy, wants to live free in any part of the country he or she wants. We must build a country that makes this desire a reality…